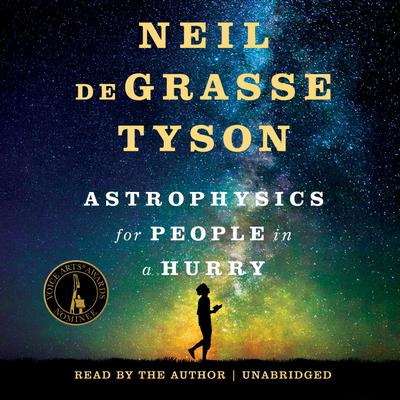 Astrophysics for People in a Hurry (Digital Audiobook)

What is the nature of space and time? How do we fit within the universe? How does the universe fit within us? There's no better guide through these mind-expanding questions than acclaimed astrophysicist and bestselling author Neil deGrasse Tyson.But today, few of us have time to contemplate the cosmos. So Tyson brings the universe down to Earth succinctly and clearly, with sparkling wit, in digestible chapters consumable anytime and anywhere in your busy day.While waiting for your morning coffee to brew, or while waiting for the bus, the train, or the plane to arrive, Astrophysics for People in a Hurry will reveal just what you need to be fluent and ready for the next cosmic headlines: from the Big Bang to black holes, from quarks to quantum mechanics, and from the search for planets to the search for life in the universe.

Neil deGrasse Tyson is an American
astrophysicist, author, and science communicator. He is currently the Frederick
P. Rose Director of the Hayden Planetarium at the Rose Center for Earth and
Space and a research associate in the department of astrophysics at the
American Museum of Natural History. From 2006 to 2011, he hosted the
educational science television show NOVA
ScienceNow
on PBS and has been a frequent guest on The Daily Show, The Colbert
Report, Real Time with Bill Maher, and Jeopardy.
In March 2014, he became host of the television series Cosmos: A Spacetime Odyssey, an update of Carl Sagan’s Cosmos: A Personal Voyage. Tyson has
written several nonfiction books, including Death
by Black Hole, which was a New York
Times bestseller.