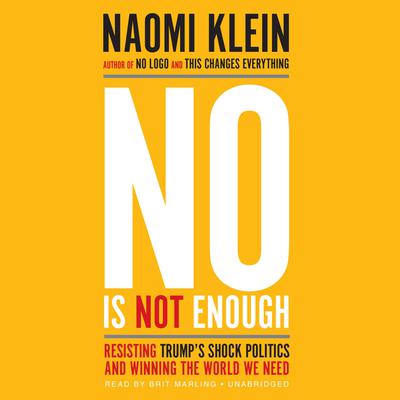 No Is Not Enough (Digital Audiobook)

Resisting Trump's Shock Politics and Winning the World We Need

A road map to resistance in the Trump era from internationally acclaimed journalist, activist, and bestselling author Naomi Klein..."This book is a toolkit to help understand how we arrived at this surreal political moment, how to keep it from getting a lot worse, and how, if we keep our heads, we can flip the script and seize the opportunity to make things a whole lot better in a time of urgent need. A toolkit for shock-resistance."-Naomi Klein, from the PrefaceThe election of Donald Trump is a dangerous escalation in a world of cascading crises. Trump's vision-a radical deregulation of the U.S. economy in the interest of corporations, an all-out war on "radical Islamic terrorism," and sweeping aside climate science to unleash a domestic fossil fuel frenzy-will generate wave after wave of crises and shocks, to the economy, to national security, to the environment.In No Is Not Enough, Naomi Klein explains that Trump, extreme as he is, is not an aberration but a logical extension of the worst and most dangerous trends of the past half-century. In exposing the malignant forces behind Trump's rise, she puts forward a bold vision for a mass movement to counter rising militarism, racism, and corporatism in the United States and around the world.

Naomi Klein is an award-winning journalist, syndicated columnist, and author of the international bestsellers No Logo, The Shock Doctrine, and most recently This Changes Everything: Capitalism vs. the Climate. In 2017 she joined The Intercept as Senior Correspondent.