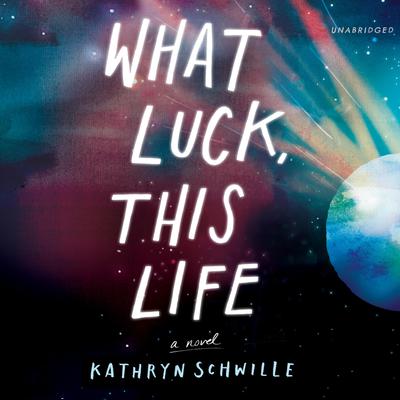 What Luck, This Life (Digital Audiobook)

The Columbia space shuttle and its contents rain down on the people of Kiser, Texas, in Kathryn Schwille's imaginative debut novel set six weeks before the invasion of Iraq.

What Luck, This Life begins in the aftermath of the space shuttle's break-up, as the people of Piney Woods watch their pastures swarm with searchers and reporters bluster at their doors. A shop owner defends herself against a sexual predator who is pushed to new boldness after he is disinvited to his family reunion. A closeted father facing a divorce that will leave his gifted boy adrift retrieves an astronaut's remains. An engineer who dreams of orbiting earth joins a search for debris and instead uncovers an old neighbor's buried longing.

In a chorus of voices spanning places and years, What Luck, This Life explores the Columbia disaster's surprising fallout for a town beset by the tensions of class, race, and missed opportunity. Evoking Sherwood Anderson's classic Winesburg, Ohio and Elizabeth Strout's Olive Kitteridge, the novel's unforgettable characters struggle with family upheaval and mortality's grip and a luminous book emerges-filled with heartache, beauty, and warmth.

Kathryn Schwille's fiction has appeared in New Letters, Memorious, Crazyhorse, West Branch, Sycamore Review, and other literary journals. Her stories have twice received Special Mention in the Pushcart Prize anthology. She was an award-winning newspaper reporter before moving to North Carolina to become an editor at the Charlotte Observer. A graduate of the MFA Program for Writers at Warren Wilson College, she lives with her husband in Charlotte, NC.