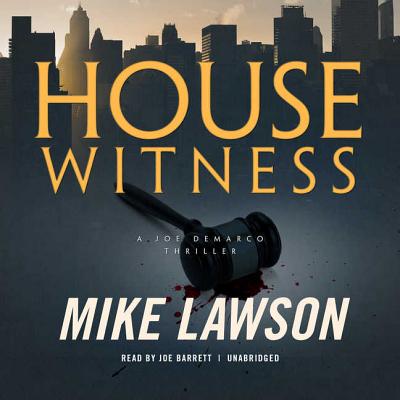 This novel in Mike Lawson's critically acclaimed series takes political fixer Joe DeMarco to New York for behind--the--scenes work on a high--stakes murder case as the witnesses start to decamp one by one.

In House Witness, the expertly plotted twelfth novel in this critically acclaimed series, Mike Lawson puts his likable protagonist on the trail of a different kind of fixer-one whose job is to inject reasonable doubt into seemingly air-tight criminal cases.

Minority Leader of the House and Joe DeMarco's long-time employer John Mahoney has kept more than one secret from his wife over the years but none so explosive as this: He has a son, and that son has just been shot dead in a bar in Manhattan. Mahoney immediately dispatches DeMarco to his native New York to provide prosecutor Justine Porter with any assistance necessary, but with five bystanders willing to testify against rich- boy Toby Rosenthal, the case seems like a slam -dunk-that is, until Porter begins to suspect that someone is interfering with those witnesses and that this may be connected to a pattern of cases across the country. Could someone be helping to get witnesses out of the way when the fate of a wealthy defendant is on the line?

With the help of Porter's intern, as outrageously smart as she is young, DeMarco becomes determined to follow that question through to its violent resolution in what turns out to be Joe DeMarco's most unexpected adventure yet.