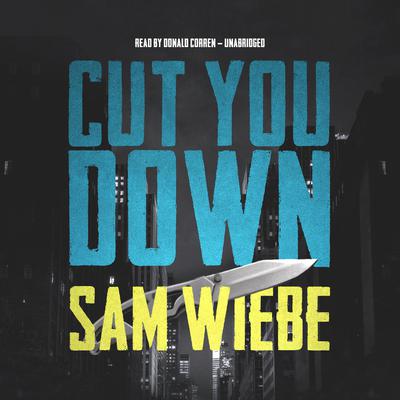 Cut You Down (Digital Audiobook)

A Novel (The Wakeland Series)

Tabitha Sorenson is missing. The bright but unstable student disappeared in the aftermath of a scandal involving millions of dollars in college funds. Professor Dana Essex doesn’t think the missing money and the missing student are connected, but she hires Vancouver PI David Wakeland to find Tabitha, with whom she is obsessed.

When Wakeland discovers Tabitha has in fact stolen the money and is hiding out with her lover and reports back to his client, Essex is crushed to learn that Tabitha is in love with someone else. The next morning, Tabitha has been murdered and Essex has disappeared.

Meanwhile, Wakeland has his own problems. His former girlfriend, police officer Sonia Drego, believes her partner is corrupt. With her job—and possibly her life—on the line, Wakeland may be her best hope of uncovering the conspiracy in the department before it brings her down.

Hounded by Tabitha’s friends, the police, the press, and his own troubled conscience, Wakeland tries desperately to find Essex and make sense of what happened. Could it all have been a ruse from the start, and is Wakeland just another in a long line of suckers?

While searching for Essex and investigating Sonia’s partner, Wakeland encounters criminals, anarchists, and crooked authority figures—all of them desperate people who will stop at nothing to guard their secrets.

Sam Wiebe's novel Last of the Independents won the Kobo Emerging Writer Prize and an Arthur Ellis Award, and was nominated for a Shamus award. His second novel, Invisible Dead, was published by Random House Canada and Quercus USA. His short stories have appeared in Thuglit, Spinetingler, and subTerrain, and he was the 2016 Vancouver Public Library Writer in Residence. He lives in Vancouver.