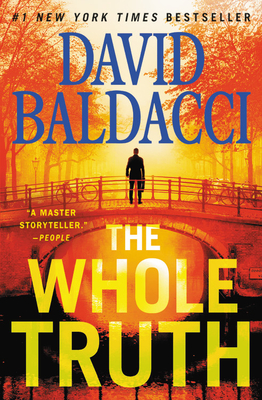 The Whole Truth (A Shaw series)

A powerful defense contractor, a reluctant intelligence agent, and an ambitious journalist race to contain and control an international crisis that could destroy the world in this #1 New York Times bestselling thriller.
"Dick, I need a war."

Nicolas Creel is a man on a mission. He heads up the world's largest defense contractor, The Ares Corporation. Dick Pender is the man Creel retains to "perception manage" his company to even more riches by manipulating international conflicts. But Creel may have an even grander plan in mind.

Shaw, a man with no first name and a truly unique past, has a different agenda. Reluctantly doing the bidding of a secret multi-national intelligence agency, he travels the globe to keep it safe and at peace.

Desperate to get back to the top of her profession, Katie James gets the break of a lifetime: the chance to interview the sole survivor of a massacre that has left every nation stunned.

In David Baldacci's first international thriller, these characters face a catastrophic threat that could change the world as we know it.

Praise For The Whole Truth (A Shaw series)…

"When Baldacci is on fire, nobody can touch him."
—Booklist (starred review)

"High-stakes action, shadowy government agencies, and [a] neo-Cold War backdrop . . . Baldacci pushes his plot ahead at such a blistering pace."
—Washington Post

"Baldacci boldly steps into the arena of international thriller and may
have created his most explosive and hard-hitting story to date."
—BookReporter.com