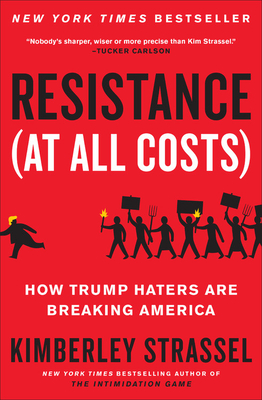 Resistance (At All Costs)

How Trump Haters Are Breaking America

Wall Street Journal columnist and New York Times bestselling author Kim Strassel argues that the all-out "Resistance" has become dangerously reckless in its obstruction of President Trump.
Among the most consistent and aggressive criticisms of Donald Trump is that he is a threat to American democracy -- a human wrecking ball demolishing our most basic values and institutions. Resistance (At All Costs) makes the opposite case -- that it is Trump's critics, in their zeal to oppose the president, who are undermining our foundations.
From the FBI's unprecedented counterintelligence investigation into the Trump campaign, to bureaucratic sabotage, to media partisanship, to the drive-by character assassination of Trump nominee Brett Kavanaugh, the president's foes have thrown aside norms, due process and the rule of law.
Resistance (At All Costs) shows that the reaction to Trump will prove far more consequential and damaging to our nation long-term than Trump's time in office.
Instant New York Times bestseller.

Praise For Resistance (At All Costs): How Trump Haters Are Breaking America…

"A rare writer who immediately recognized the deception and corruption fueling the collusion hysteria, Strassel vividly describes the 'Russiagate' hoax as well as the Left's shocking disregard for honesty, integrity, and the rule of law."—Congressman Devin Nunes

"Strassel's courage to stand up to the groupthink of the political media makes her a national treasure. Her fact-filled reporting exposes a simple but hidden truth: The Resistance is violating the norms they claim to care so much about, leaving a lasting and damaging mark on the country."—Mollie Hemingway, senior editor, The Federalist

"A vitally important review of the incredible abuses of power that accompanied the 2016 campaign."
—Hugh Hewitt

Kimberley Strassel is a member of the Wall Street Journal editorial board. Since 2007 she has written the "Potomac Watch" column and has worked for the Wall Street Journal in Brussels, London, New York and Washington. An Oregon native, Ms. Strassel is a graduate of Princeton University and is the author of the bestselling The Intimidation Game.
Loading...
or support indie stores by buying on