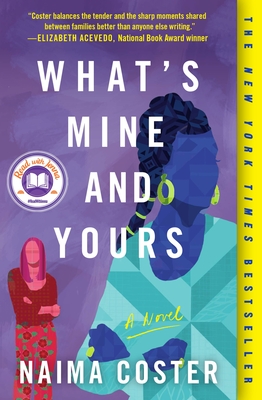 What's Mine and Yours

From the author of Halsey Street, a sweeping novel of legacy, identity, the American family—and the ways that race affects even our most intimate relationships.

In the Piedmont of North Carolina, two families’ paths become unexpectedly intertwined over twenty years. Jade and Lacey May are two mothers determined to give their children the opportunities they never had. After a harrowing loss, Jade wants to hand down the tools her son, Gee, will need to survive in America as a sensitive young Black man. Meanwhile, Lacey May, having left the husband she loves, strives to protect her three half-Latina daughters from their charming father’s influence.

When a county initiative draws students from the largely Black east side of town into a predominantly white high school on the west, each mother stands on different sides of the integration debate. Gee meets Lacey May’s daughter Noelle during the school play, and their families begin to form deeply knotted, messy ties that will shape the trajectory of their adult lives. And their mothers make choices that will haunt them for decades to come.

What’s Mine and Yours is an expansive yet intimate multigenerational tapestry of motherhood, identity, and the legacies we inherit. It explores the unique organism that is every family: what breaks them apart and how they come back together.


Praise For What's Mine and Yours…

“At its heart, What’s Mine and Yours is a coming-of-age story—one that examines the unraveling of marriages, complexities of siblinghood and reckonings with parents… Coster portrays her characters’ worlds with startling vitality. As the children fall in lust and love, grapple with angst and battle the tides of New South politics, Coster’s writing shines."

“The complex characters will stay with you—maybe even change you.”—People

“Coster’s remarkable characters, each one of them authentically flawed and gorgeously realized, propel this wise and loving story ever forward, making for a graceful meditation on family, inequality, and the ties that bind.”

"Coster is an exacting observer but also an endlessly generous one… It’s the individual moments that are exquisite, each chapter a tiny snapshot of a whole world. Tender but—miraculously—never sentimental."—Kirkus (Starred Review)

"What's Mine and Yours is a once-every-few-years reading experience for me. I was completely seduced by the honesty of Coster's prose, the tenderness she has for her characters. To say Coster pulls off something special here is a massive understatement. I've placed this novel on a shelf among those most dear to me, and I imagine I'll return to it many, many times."—Mary Beth Keane, New York Times bestselling author of Ask Again, Yes

"Coster balances the tender and the sharp moments shared between families better than anyone else writing."—Elizabeth Acevedo, National Book Award winner of Poet X

“What’s Mine and Yours is both intimate and sweeping: an exploration of many kinds of love, the repercussions of long ago decisions, and the burdens of personal and political history. I loved this novel.”—Christina Baker Kline, #1 New York Times bestselling author

"What's Mine and Yours explodes with love, passion, and their piercing aftermath. Naima Coster renders two unforgettable families, their labyrinthine bonds and heartaches, with propulsive and startling clarity. This is a novel of scorching beauty."—Patricia Engel, author of Infinite Country

"Coster… depict[s the characters] complex situations and moral ambiguities with depth and compassion. Weaving numerous plot threads — miscarriages, abortions, divorces, brain tumors, benders—into an intricate tapestry, Coster shows, as one of her indelible minor characters declares, that 'It's only our life if we say so. Otherwise it belongs to them.'"—Minneapolis Star Tribune

"What’s Mine and Yours is a lyrical, universal story about home, reminiscent of the works of Jacqueline Woodson and Tayari Jones."—Atlanta Journal-Constitution

“Rare is the book that manages to be both a finely wrought character study as well as a multi-family saga…but Naima Coster's new novel does just that — and more. Coster writes with a singular sensitivity and nuance."—Refinery29

“What's Mine and Yours is powerful and unfailingly generous, a story of two families you won’t be able to forget. Marvelously profound and moving.”—R.O. Kwon author of The Incendiaries

"Moving fluidly between perspectives and time, What's Mine and Yours is a mesmerizing story of two families brought together through choice and circumstance in one North Carolina town. Naima Coster is a storyteller of astounding clarity and compassion."—Lisa Ko, National Book Award finalist of The Leavers

"What's Mine and Yours is a book about parents who try and fail and then try again. An extraordinary cast of characters, nuanced and full of insight. It's about children who hold their loved ones accountable. It reveals in absolutely engrossing and tension-filled prose how a tragedy haunts a family. Coster is a master storyteller through and through. Read this book."—Angie Cruz, author of Dominicana

"What's Mine And Yours is a powerful and timely family saga about the complex webs forged by love and tragedy - gripping, generous, and deeply felt. It's a moving examination of what we inherit, and what it means to love both wholeheartedly and imperfectly. This is a book, in other words, for anyone who's ever had a family."—Rachel Khong, author of Goodbye, Vitamin

"Naima Coster's What's Mine and Yours patiently and unerringly tracks the boundaries, unearths the secrets, and stares unblinkingly at what's essential to knowing oneself and the larger histories we're forced to navigate. A beautifully-wrought investigation of family, race, inheritance, and belonging."—Cristina García, author of Here in Berlin and Dreaming in Cuban

Naima Coster's What's Mine and Yours moves from moment to moment of startling grace. This expansive, generous novel tackles big themes - systemic racism, the reverberations of gun violence, class inequity - but it always feels thrillingly personal. Multiple times, it moved me to tears. An exquisite and vital portrait of family, place, and the bonds that transform our lives, What's Mine and Yours is more than a beautiful read - it's an essential one, destined to be talked about for years to come as a book that saw the world and spoke the truth with tenderness, wisdom, and love."—Julie Buntin, author of Marlena

"Through its flawed and flawlessly crafted ensemble cast, Naima Coster's What's Mine and Yours shows us how a single tragedy ripples through two families and a community already on the edge. Crisscrossing time, states, and the Atlantic Ocean, Coster explores the complexities of marriage, race, and family ties in this engrossing and deftly woven novel."—Melissa Rivero, author of The Affairs of the Falcóns

"Naima Coster weaves a beautiful tapestry of voices together in What's Mine and Yours. This is a sprawling, moving narrative about the messiness of love and family, mothering, race, and community. Here we follow two families connected by place and circumstance as they try to free themselves of those bonds. The result? Rich, complex individual stories that merge to form a satisfying, startling end."—Crystal Hana Kim, Author of If You Leave Me

"Naima Coster is definitely a writer to watch. Her clear-eyed writing interrogates race, class, and family in a refreshing and thoroughly engaging way. A lovely and thoughtful book."—Jacqueline Woodson, author of Red at the Bone and National Book Award winner (praise for Halsey Street)

“Coster’s remarkable characters, each one of them authentically flawed and gorgeously realized, propel this wise and loving story ever forward, making for a graceful meditation on family, inequality, and the ties that bind.”—Redbook

Naima Coster is the New York Times bestselling author of What’s Mine and Yours. She is also the author of Halsey Street, and a finalist for the 2018 Kirkus Prize for Fiction and was a 2020 National Book Foundation's 5 Under 35 honoree. Naima's stories and essays have appeared in the New York Times, Kweli, the Paris Review Daily, Catapult, the Rumpus, and elsewhere. She holds an MFA in Creative Writing from Columbia University, as well as degrees from Fordham University and Yale. She has taught writing for over a decade, in community settings, youth programs, and universities. She lives in Brooklyn with her family.

1. At the beginning of What’s Mine and Yours, Robbie Ventura tells Ray Gilbert to get property that no one will ever take away from his children, in order to build a legacy. What other legacies do the parents in this novel leave their children? What would you want to leave your loved ones?

2. The parents and children of What’s Mine and Yours exist with a significant chasm between them. Discuss the ways that the Ventura daughters and Gee don’t often see the motivations behind their parents’ choices, nor the sacrifice, and how did it resonate with you and your own life?

3. When Inéz visits Noelle in Golden Brook, she’s afraid that her friend is losing her sense of self while out in the suburbs, especially after hearing the story of a Black woman and her son threatened with the police by a neighbor. How did you feel about the party’s reaction to that story and Inéz’s criticism of Noelle’s silence?

4. There are many versions of caregiving in this novel that go beyond just parent and child. Discuss the ways that these characters are playing the role of mother for one another.

5. The two mothers in the novel, Lacey May and Jade, both wanted what was best for their children, regardless of how it’s received by them and the broader implications of their actions. Do you believe Noelle and Gee ultimately reach an understanding as to why their mothers behaved how they did?

7. When Noelle, Margarita, and Diane come together in their search for Robbie, Noelle attempts to heal the rift between them, despite their fraught relationship. She tells Margarita, “I’ve been thinking. Our parents are always going to have their problems, but that doesn’t mean we have to stay away from each other. We can be family on our own terms.” Noelle is attempting to heal a long-standing wound. How do other characters in the book attempt to do the same with the people in their lives?

8. Noelle is labeled as white multiple times, most notably by Inéz and Ruth, which results in two different reactions in the moment. Why did Noelle’s response vary in each instance? Have there been moments where you have not been seen in the way that you identify?

9. Identity politics is an important thread throughout this novel. Discuss the ways in which Diane has internalized some of Lacey May’s prejudices. How does that affect her relationship with Alma?

10. Jade fights for her son’s place in the world, wanting him to have more opportunities than she or Ray had. Discuss how this influences Gee and shapes what he expects from the world and other people.

11. This novel is filled with mostly fraught relationships that ultimately show the depth and complexities of love. Was there a particular relationship in the novel that spoke to you the most? Did it remind you of a relationship in your own life?

12. When Noelle and Ruth speak about Lacey May’s acceptance of Alma, Noelle comments, “It’s not the same as being black.” Discuss what Noelle means by this.

13. By the final scenes at the wedding, it appears that Noelle has reconciled with her family. Yet she grapples with their limitations and the way they can progress in certain ways, accept some things but not others. Discuss what is meant by the line, “They’d never admit how willingly they’d played their parts.