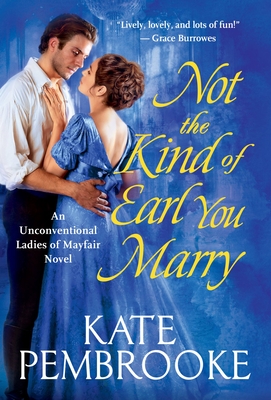 Fans of Netflix's Bridgerton series will adore this stunning historical romance debut, where a wary wallflower enters a fake engagement with one of London's most eligible bachelors.

The one woman in London who doesn’t want to marry him is now his fiancée.

William Atherton, Earl of Norwood, is as shocked as the rest of London to discover his betrothal via an announcement in the morning paper. Furious at what appears to be a shrewd marriage trap, William tracks down his alleged fiancée before her plans can affect his campaign for a coveted political post. But then William realizes an engagement, however fake, may benefit them both . . .

Miss Charlotte Hurst may be a wallflower, but she’s no shrinking violet. She would never attempt such an underhanded scheme, especially not with a man as haughty or sought-after as Norwood. Yet his suggestion to play along with the betrothal has its merits . . . and the longer they pretend, the more undeniably real their feelings become. But when the true culprit behind their engagement is revealed, can their newfound happiness survive the scandal?

“A terrific debut with one of my favorite tropes done brilliantly. Lovely, lively, and lots of fun!”—Grace Burrowes, New York Times bestselling author

"Romance fans will be charmed by this sweet Regency tale!"—Kate Bateman, author of The Princess and the Rogue

"A beautifully written regency of the highest caliber."—Elizabeth Everett, author of A Lady’s Formula for Love

"A perfectly executed Regency historical with an engagingly nuanced cast of characters, graceful writing leavened with droll wit, and a surfeit of sophisticated sensuality."—Booklist

Kate Pembrooke is a lifelong reader whose path to becoming an author of Regency romance was forged when she first read Jane Austen's Pride and Prejudice. Kate lives with her family in the Midwest. She loves puttering amongst her flowerbeds, taking beach vacations, and adding to her already extensive collection of cookbooks.