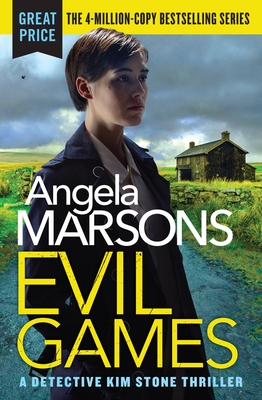 Detective Kim Stone learns the heard way that the greater the evil, the more deadly the game in this gripping psychological thriller from USA Today bestselling author Angela Marsons.  When a rapist is found mutilated in a brutal stabbing, Detective Kim Stone and her team are called in to bring a swift resolution. But as further disturbing events come to light, it soon becomes clear that there is someone even more sinister at work.

With the investigation gathering momentum, while also trying to expose the secrets of a sick pedophile ring, Kim finds herself in the sights of a lethal individual undertaking their own twisted experiment.

Pitted against a dangerous sociopath who seems to know her every weakness, for Detective Stone, each move she makes could be deadly. As the body count starts to mount, Kim will have to dig deeper than ever before to stop the killing. And this time–it’s personal.

Angela Marsons is the USA Today bestselling author of the Detective Kim Stone series, and her books have sold more than four million copies and have been translated into twenty-seven languages. She lives in the Black Country, in the West Midlands of England, with her partner and their two Golden Retrievers. She first discovered her love of writing at junior school when actual lessons came second to watching other people and quietly making up her own stories about them. Her report card invariably read "Angela would do well if she minded her own business as well as she minds other people's." After writing women's fiction, Angela turned to crime—fictionally speaking, of course—and developed a character that refused to go away.
Loading...
or support indie stores by buying on