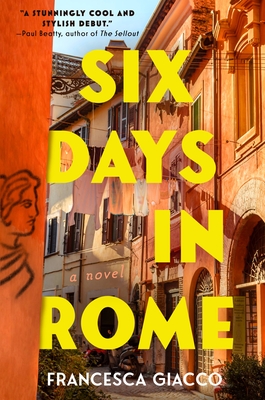 In this decadent, deeply evocative novel, a young artist travels to Rome to heal a broken heart, where she ​confronts loneliness and intimacy, rage and desire: “Sensorial as hell . . . A stunningly cool and stylish debut" (Paul Beatty, Man Booker Prize-winning author of The Sellout).

Emilia arrives in Rome reeling from heartbreak and reckoning with her past. What was supposed to be a romantic trip has, with the sudden end of a relationship, become a solitary one instead. As she wanders, music, art, food, and the beauty of Rome's wide piazzas and narrow streets color Emilia's dreamy, but weighty experience of the city. She considers the many facets of her life, drifting in and out of memory, following her train of thought wherever it leads.

While climbing a hill near Trastevere, she meets John, an American expat living a seemingly idyllic life. They are soon navigating an intriguing connection, one that brings pain they both hold into the light.

As their intimacy deepens, Emilia starts to see herself anew, both as a woman and as an artist. For the first time in her life, she confronts the ways in which she's been letting her father’s success as a musician overshadow her own. Forced to reckon with both her origins and the choices she's made, Emilia finds herself on a singular journey—and transformed in ways she never expected.

Equal parts visceral and cerebral, Six Days in Rome is an ode to the Eternal City, a celebration of art and creativity, and a meditation on self-discovery.

Praise For Six Days in Rome…

"Francesca Giacco is a stunning writer and Six Days in Rome is a brilliant transporting experience—a novel about belonging with heart and heat; a gorgeous and literary holiday."—Lisa Taddeo, #1 New York Times bestselling author of Three Women and Animal

“Sometimes it takes a three-thousand-year-old city to feel brand new. Six Days in Rome unfolds with all the crisp wonderment of a two-star hotel map. Sensorial as hell, it acknowledges the major landmarks and thoroughfares, but knows you have to get lost in the invisible, the unrendered to find what you didn’t know you were looking for. An ode to funky wine labels, good taste, and true inspiration, Francesca Giacco has penned a stunningly cool and stylish debut.”—Paul Beatty, Man Booker Prize winning author of The Sellout

"If Sally Rooney and Frances Mayes co-wrote a novel in an Airbnb near the Spanish Steps, it might read something like Six Days in Rome. Smart, keenly observed, and deeply felt, this is a book for anyone who's ever journeyed abroad to find themselves."—David Ebershoff, New York Times bestselling author of The Danish Girl and The 19th Wife

"Giacco's debut is an intimate, entertaining, clear-eyed evocation of a disillusioned young female artist's coming of age amongst the ruins of Rome and like her heart-broken narrator, very good company."—Elissa Schappell, Author of Blueprints for Building Better Girls

"Six Days in Rome is a masterful debut—a literary travelogue that maps both the internal and external, capturing the intimate fireworks of heartbreak and the endless question of identity, alongside the sumptuous backdrop of Rome. Francesca Giacco has written a novel as artful as it is affecting."—Adrienne Brodeur, Author of Wild Game: My Mother, Her Lover and Me

“In this sensual novel of rage, heartbreak, and desire, a young artist named Emilia travels to Rome to reckon with the end of a relationship. When an encounter with an American expat sparks a new connection, Emilia begins to see herself in a new light—both as a woman and as an artist.”

Francesca Giacco is a graduate of Barnard College and the MFA program at Columbia University. She lives in New York. Six Days in Rome is her first novel.