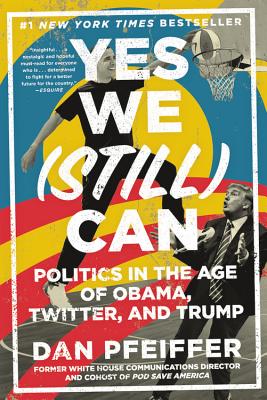 Yes We (Still) Can

Pfeiffer was one of Obama's first hires when he decided to run for president, and was at his side through two presidential campaigns and six years in the White House. Using never-before-heard stories and behind-the-scenes anecdotes, Yes We (Still) Can examines how Obama succeeded despite Twitter trolls, Fox News (and their fake news), and a Republican Party that lost its collective mind.

An irreverent, no-BS take on the crazy politics of our time, Yes We (Still) Can is a must-read for everyone who is disturbed by Trump, misses Obama, and is marching, calling, and hoping for a better future for the country.

Praise For Yes We (Still) Can: Politics in the Age of Obama, Twitter, and Trump…

"Dan is one of the most brilliant observers of politics and media in America, and he's never lost faith in the idea that activism and public service are noble, worthwhile pursuits -- especially for young people who want to make a difference. We learned a lot from YES WE (STILL) CAN, and we literally host a show with the guy every week. In other words, we're annoyed that he saved the best stuff for the book."—Pod Save America cohosts Jon Favreau, Jon Lovett, and Tommy Vietor

"I love YES WE (STILL) CAN for many reasons, but most importantly because you will all get to know and learn from the best bro I know. Dan Pfeiffer's wit, brain, charm, humor, and compassion make him a formidable storyteller, the best colleague, and an even better friend. Also without him, I never would have learned how to tweet. Seriously."—Alyssa Mastromonaco, New York Times bestselling author of Who Thought This Was a Good Idea?

"YES WE (STILL) CAN captures the lessons of Yes We Did during the Obama years and offers clear lessons for why 2016 happened, and how progressives must adapt to win again."—p.p1 {margin: 0.0px 0.0px 0.0px 0.0px; font: 12.0px Helvetica}David Plouffe, former campaign manager and White House senior advisor to President Obama

"In YES WE (STILL) CAN, Dan Pfeiffer has found a way to be nostalgic for the past while still motivating you in the present. Come for the uplifting stories about his journey with President Obama, stay for the honest (and optimistic) outlook on how Democrats can get their groove back and end the Trump era. A must-read for anyone who has asked the question: "'Now what do we do?'"—Jason Kander, host of Majority 54 and president of Let America Vote

Dan Pfeiffer is the #1 New York Times bestselling author of Yes We (Still) Can and a cohost on Pod Save America. One of Barack Obama's longest serving advisors, he was White House director of communications under President Obama (2009-2013) and senior advisor to the president (2013-2015). He currently lives in the Bay Area with his wife, Howli, and their daughter, Kyla.
Loading...
or support indie stores by buying on