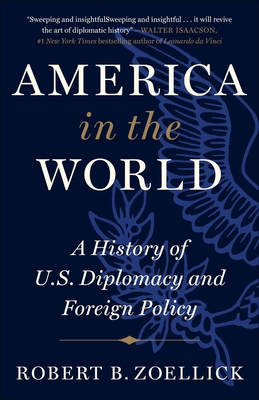 America in the World

America has a long history of diplomacy–ranging from Benjamin Franklin, Alexander Hamilton, and Thomas Jefferson to Henry Kissinger, Ronald Reagan, and James Baker–now is your chance to see the impact these Americans have had on the world.
Recounting the actors and events of U.S. foreign policy, Zoellick identifies five traditions that have emerged from America's encounters with the world: the importance of North America; the special roles trading, transnational, and technological relations play in defining ties with others; changing attitudes toward alliances and ways of ordering connections among states; the need for public support, especially through Congress; and the belief that American policy should serve a larger purpose. These traditions frame a closing review of post-Cold War presidencies, which Zoellick foresees serving as guideposts for the future.

Both a sweeping work of history and an insightful guide to U.S. diplomacy past and present, America in the World serves as an informative companion and practical adviser to readers seeking to understand the strategic and immediate challenges of U.S. foreign policy during an era of transformation.


Praise For America in the World: A History of U.S. Diplomacy and Foreign Policy…

"AMERICA IN THE WORLD is a highly accessible and engaging history of U.S. diplomacy written by one of the country's smartest and most capable foreign policy practitioners. Robert Zoellick understands better than most how inseparable America's fate is from the rest of the world, and that timely lesson shines through the pages of this book."—Former Secretary of State Madeleine Albright

"Bob Zoellick has accomplished the near impossible -- he has written a seminal work thatis groundbreaking, historically insightful, and entertaining in a way that will appeal to scholars and general readers alike. America in the World provides a new framework for understanding the history of America's foreign policy, and is chock-full of fascinating vignettes that reveal our nation's pragmatism and innovative spirit."—Henry M. Paulson, Jr., former United States Secretary of the Treasury

"This book is so sweeping and insightful that it will revive the art of diplomatic history. Robert Zoellick emphasizes America's pragmatic instincts, from Benjamin Franklin to George H.W. Bush, as well as the key role that technology and trade have played in furthering our influence. In addition to being a fascinating historic narrative, this book provides a great framework for understanding our role in the world today."—Walter Isaacson, #1 New York Times bestselling author of Leonardo da Vinci

"Few people understand statecraft or have practiced it as adroitly as Robert Zoellick. His new book, AMERICA IN THE WORLD, examines the history of U.S. diplomacy and the emphasis our nation's diplomats have placed on pragmatic results over theoretical approaches. As we march into the uncertain future of a multipolar world, Zoellick successfully argues that this tradition will be critical for the country to maintain its place on the world stage."
—James A. Baker, III, 61st U.S. Secretary of State

"A masterful review of America's role in the world from Benjamin Franklin's foray to Paris as America's first diplomat to the tumultuous experiences of recent years, with thoughtful reflections on the traditions that have evolved since our founding and a superb consideration of the possibilities for the years ahead. AMERICA IN THE WORLD is a wonderful read, one that reflects the pragmatism of an experienced practitioner, the painstaking research of a serious scholar, the trained eye of a historian, and the judiciousness of thinking that has distinguished the best episodes in America's foreign policy -- and Bob Zoellick's contributions to them."—General David Petraeus (US Army, Ret.), former Commander of the Surge in Iraq, US Central Command, and Coalition Forces in Afghanistan, and former Director of the CIA

"One of America's preeminent statesmen offers a masterful survey of American diplomacy, its practitioners, and its traditions. Full of rich narrative and sharp insights, this is an essential guide to steer the ship of American diplomacy in a more complicated, crowded, and competitive international landscape."—Ambassador William J. Burns, President, Carnegie Endowment for International Peace and former Deputy Secretary of State

"With the unique insight of a practitioner-scholar, Robert Zoellick takes readers through the riveting story of America's distinctive statecraft from Ben Franklin to Trump -- filled with clear-eyed analysis and practical lessons for anyone interested in leadership, negotiation, and diplomacy today."—Graham Allison, bestselling author of Destined for War and Douglas Dillon Professor of Government, Harvard Kennedy School

"An extraordinary contribution to the history of American foreign policy, told from the perspective of a wise and pragmatic practitioner. A great read."—Joseph S. Nye, author of Do Morals Matter?: Presidents and Foreign Policy from FDR to Trump

"An outstanding history of US foreign policy by one of its leading practitioners. Zoellick grasps the essence of the debates over America's role in the world, and shows the constant interaction between global developments and the approaches of US policymakers. It is a diplomatic history for the 21st century, grounded in the practical lessons of centuries past."—O.A. Westad, Yale University

"AMERICA IN THE WORLD is a sweeping history of U.S. foreign policy, from the founding fathers to the present day. Insightful, provocative, non-ideological and pragmatic, Bob Zoellick skillfully distills the lessons of history and the essential traditions of American diplomacy. A must-read for foreign policy makers and watchers alike."—Michèle Flournoy, co-founder and managing partner of WestExec Advisors, former under secretary of defense (2009-2012)

"This well-researched, well-written, and at times deeply passionate examination of America's role in the world is the product of decades of profound thought from one of the world's top decision-makers. Robert Zoellick's insider knowledge mixes with his sharp historical acuity to produce a convincing thesis that should guide modern America for decades to come."—Andrew Roberts, author of Churchill: Walking with Destiny

"Robert Zoellick's AMERICA IN THE WORLD both educates and entertains. Unlike many other sweeping works of history, Zoellick puts his subjects -- rather than theories or frameworks -- at the center of his book, using stories to both captivate his reader and illuminate meaningful trends in American diplomacy. He presents a different and compelling lens through which to consider nearly two centuries of American foreign policy -- that of pragmatism. As a diplomat, historian, and pragmatist himself, Zoellick identifies enduring U.S. foreign policy traditions and offers a welcome reminder that for much of the country's history, the perception of American exceptionalism has animated U.S. actions in the world, mostly for good. At a time when the global order is under such strain, AMERICA IN THE WORLD provides a much-needed anchor to those who are rethinking America's role in the world and will be responsible for crafting it."—Meghan L. O'Sullivan, Jeane Kirkpatrick Professor of the Practice of International Affairs and author of Windfall

"[A] significant achievement. Zoellick makes a strong case that the story of the past can help us make the future better."—Washington Post

"A useful, knowledgeable...history of American foreign policy from a veteran in the field of 'pragmatic diplomacy.'"—Kirkus

"Here is a book that will make your chest heavy with regret for what has been lost but also buoyant with hope that a brighter future can be achieved."—New York Journal of Books

"[A] highly readable and insightful history of US foreign policy."—Niall Ferguson

"A magisterial, unlikely ever to be bettered survey of American foreign policy since the Revolution, marked by the insights of a key member of the outstandingly successful foreign policy team of President George HW Bush. Five stars."

Robert B. Zoellick has served as Deputy Secretary of State, U.S. Trade Representative, and President of the World Bank. Earlier in his career, Zoellick served as Counselor to the Secretary of the Treasury and Deputy Chief of Staff at the White House and Assistant to President George W. Bush. Zoellick is now a Senior Fellow at the Belfer Center for Science and International Affairs at Harvard University's Kennedy School of Government.
Loading...
or support indie stores by buying on