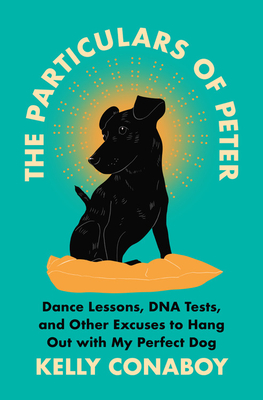 The Particulars of Peter (Hardcover)

Dance Lessons, DNA Tests, and Other Excuses to Hang Out with My Perfect Dog

From one of the Internet's most original voices, a hilarious journey through the odd corners of obsessive dog ownership and the author's own infatuation with her perfect dog Peter.
The author met Peter in the spring of 2017. He -- calm, puppy-eyed, with the heart of a poet and the soul of, also, a poet -- came to her first as a foster. He was unable to stay with his previously assigned foster for reasons that are none of your business, but which we will tell you were related to frequent urination. The rescue needed someone free of the sort of responsibilities that would force her to regularly leave the house for either work or socializing, and a writer was the natural choice. Thus began a love story for the ages.

The Particulars of Peter is a funny exploration of the joy found in loving a dog so much it makes you feel like you're going to combust, and the author's potentially codependent relationship with her own sweet dog, Peter. Readers will follow Peter and his owner to Woofstock, "the largest outdoor festival for dogs in North America," and accompany them to lessons in Canine Freestyle, a sport where dogs perform a routine set to music, creating the illusion that they're dancing with their owners. From learning about Peter's DNA, to seeing if dogs can sense the presence of ghosts, The Particulars of Peter will give readers a smart, entertaining respite from the harsh world of humans into the funny little world of dogs.
Readers will accompany this lovable duo through exciting trips, lessons, quiet moments of connection, and probably a failure or two. By fusing memoir and infotainment, The Particulars of Peter promises to refresh the perennially popular dog lit category in a scrumptiously bighearted barnstormer of a book.

Kelly Conaboy is a writer in Brooklyn, New York. She's written for New York Magazine's The Cut, as well as the Hairpin, Gawker, and Videogum. Most of those websites no longer exist. (This is not because of Kelly.) She's been published by The Atlantic, the New Yorker, and the New York Times. Her humor piece for the New Yorker's "Shouts & Murmurs" section was adapted for the New Yorker Radio Hour and read for air by Ellie Kemper .
or support indie stores by buying on
Copyright © 2020 American Booksellers Association