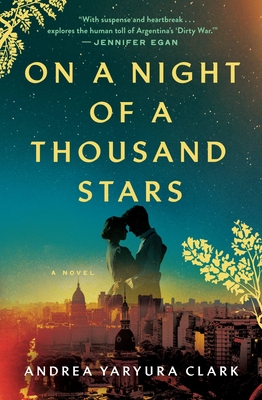 On a Night of a Thousand Stars

In this moving, emotional narrative of love and resilience, a young couple confronts the start of Argentina's Dirty War in the 1970s, and a daughter searches for truth twenty years later.

New York, 1998. Santiago Larrea, a wealthy Argentine diplomat, is holding court alongside his wife, Lila, and their daughter, Paloma, a college student and budding jewelry designer, at their annual summer polo match and soiree. All seems perfect in the Larreas’ world—until an unexpected party guest from Santiago's university days shakes his usually unflappable demeanor. The woman's cryptic comments spark Paloma’s curiosity about her father’s past, of which she knows little.

When the family travels to Buenos Aires for Santiago's UN ambassadorial appointment, Paloma is determined to learn more about his life in the years leading up to the military dictatorship of 1976. With the help of a local university student, Franco Bonetti, an activist member of H.I.J.O.S.—a group whose members are the children of the desaparecidos, or the “disappeared,” men and women who were forcibly disappeared by the state during Argentina’s “Dirty War”—Paloma unleashes a chain of events that not only leads her to question her family and her identity, but also puts her life in danger.

In compelling fashion, On a Night of a Thousand Stars speaks to relationships, morality, and identity during a brutal period in Argentinian history, and the understanding—and redemption—people crave in the face of tragedy.


Praise For On a Night of a Thousand Stars…

"With suspense and heartbreak, Andrea Yaryura Clark’s debut novel explores the human toll of Argentina’s Dirty War, whose atrocities can still upend the most cloistered and prosperous lives. On a Night of a Thousand Stars turns one woman’s genealogical quest into a searing indictment of the complicity inherent in cultural silence."—Jennifer Egan, New York Times bestselling author of Manhattan Beach

"This novel sheds light on a dark chapter in Argentina's history, the effects of the country's worst dictatorship, and the consequences for those left behind and those who survived."—Greer Hendricks, New York Times bestselling co-author of The Wife Between Us

"A powerful debut about a chapter in history that must be told."—Janice Y.K. Lee, New York Times bestselling author of The Expatriates and The Piano Teacher

"In luminescent prose and exquisite detail, Andrea Yaryura Clark chronicles a family's history through the political turmoil of Argentina's Dirty War and beyond. Both heart-rending and hopeful, On a Night of a Thousand Stars explores the strength and endurance of love and familial bonds in the face of chaos and tragedy. A deeply moving, timely and important debut."—Cristina Alger, New York Times bestselling author of Girls Like Us

"Andrea Yaryura Clark’s deep understanding of the complexity and savagery of Argentine history brings an authority to this gripping novel, a chilling reminder of the precariousness of human rights and the extraordinary bravery of those fighting to preserve freedom for all."—Lisa Gornick, Author of The Peacock Feast

"In Andrea Clark’s debut novel, she has accomplished the remarkable feat of rendering the political and the human story, telling a painful narrative of lives lost, Argentinian history, and the family. Brava and welcome.”—Roxana Robinson, Author of Dawson's Fall

"A skillful debut which serves as a reminder that a country's past can never be left in the past."—Kirkus Reviews

"A compelling story of a time and place that might not be well known to American readers, as well as a heartbreaking narrative of generational trauma."—Booklist

"History is reclaimed in this magnetic debut, with Clark determined to excavate the past on behalf of its sufferers."—Toronto Star

"You know you’re getting some good historical fiction with a title like that."—Betches

"A rollercoaster of emotion that draws in readers with its characters and depiction of this period in history."—Scale it Simple

Andrea Yaryura Clark grew up in Argentina amid the political violence of the 1970s until her family moved to North America. After completing her university studies, she returned to Buenos Aires to reconnect with her roots. She followed with interest the stories then emerging about the children of the "disappeared"—the youngest victims of Argentina’s military dictatorship in the 1970s—who were coming of age and grappling with the fates of their families. She conducted numerous interviews documenting their stories, which inspired her debut novel of historical fiction. She lives in Brooklyn with her husband, two sons and a spirited terrier.
Loading...
or support indie stores by buying on