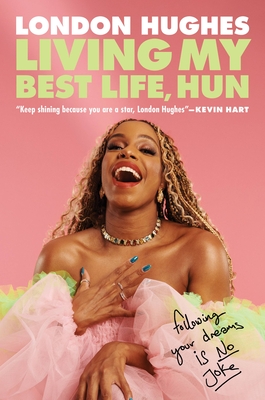 Following Your Dreams Is No Joke

From stand-up comedian, actress, and host of The Netflix Afterparty London Hughes comes an uplifting and raucously funny memoir to show you how to ditch the self-loathing, start the self-loving, and engage with your inner winner.

London Hughes has come a long way from secretly writing Frasier fan fiction alone in her bedroom. Between her breakout Netflix comedy special, To Catch a D*ck, her dating podcast “London, Actually,” and her award-winning TV performances, London the South Londoner has taken the entertainment world by storm. And now, in this sassy, brash, fearless, and funny memoir, London is ready to inspire women of all ages and races with her story—because London is absolutely the best person in the whole wide world to take you on a wild journey of self-discovery. As she herself puts it: “I’ve always been funny. I’ve always been cute. I’ve always been confident. I was born to do this shit.”

All her life, London longed to be a badass—an awesome bullet-proof woman who nobody could mess with. At a young age, she made sure she was ready to become a star, developing her own living-room popstar training regimen to prepare for her future life. But London also had her fair share of disastrous experiences in terms of friendships, relationships, and career choices. Each of the fiascos in London’s life has, with hindsight, proved to be a formative life lesson, and helped her grow into the fearless person she is today. You'll definitely be grateful these setbacks happened to her and not you, but you'll also learn that however bad things get, you can always build your self-worth, think long-term, and emerge triumphant, no matter what the world throws at you.

From birthday parties gone wrong to family drama, from wanting desperately to be famous to starting out on less-than-desirable TV shows, from navigating school bullies and boyfriends, London leaves no stone unturned in Living My Best Life, Hun. It took London some time to find her voice and her people, but now that she has, she's mentally high-fiving her 14-year-old self every day.

London Hughes is a stand-up comedian, writer, actor, and host, who was the first British Black woman to be nominated for the Dave Edinburgh Comedy “Best Show” Award for To Catch a D*ck, which was recently recorded as her debut comedy special for Netflix. London was awarded the Royal Television Society Award 2020 for “Best Entertainment Performance” for her impressive work on ITV2’s hip-hop comedy quiz show Don’t Hate The Playaz, and in 2009 received the prestigious “Funny Women Award” at the London Comedy Store. London has appeared in the BBC/Amazon award-winning and critically acclaimed series Fleabag, as well as The Stand-Up Sketch Show on ITV2. London also created, wrote, and starred in her own YouTube comedy series, No Filter, which featured some of the UK’s brightest new talent. She has also hosted Channel 5’s Extreme Hair Wars and appeared on BBC2’s satirical panel show Mock the Week. Her dating podcast, “London, Actually,” is available on Spotify. Originally from Croydon, South London, she is currently based in Los Angeles.
Loading...
or
Not Currently Available for Direct Purchase