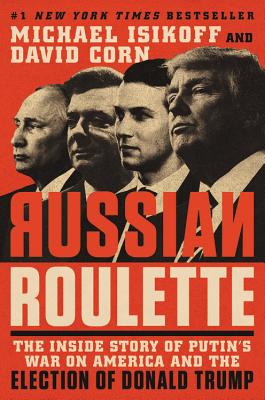 Praise For Russian Roulette: The Inside Story of Putin's War on America and the Election of Donald Trump…

"[RUSSIAN ROULETTE] does an outstanding job of putting the Russia-Trump story into context, separating rumor from fact and adding new information...A smart, solid, even-handed book that future historians will use as a starting point."—Booklist (starred review)

"Russian Roulette performs an important service in tracing how establishment Washington -- policymakers, intelligence chiefs, journalists -- came to understand that what Russia was (and reportedly is still) up to was not routine espionage...engaging, smart."—Los Angeles Times

"An eye-popping exposé of what amounts to a Cabinet appointment for Vladimir Putin in the Trump White House. If you're puzzled why the sitting president isn't going after the Russians for election tampering and other bad behavior, this is just the book to explain."—Kirkus

"This narrative by investigative reporters Michael Isikoff and David Corn leaves the reader nearly overwhelmed by evidence that Trump and Vladimir Putin have been striving to collaborate for years. Russian Roulette...makes many important contributions to this extraordinary story."—The Guardian

"With decades of experience from working the capital's cloakrooms and briefing rooms, [Michael Isikoff and David Corn] are deft practitioners of the modern craft of political book prose...Russian Roulette is a public service."—PopMatters

David Corn is a veteran Washington journalist and political commentator. He is the Washington bureau chief for Mother Jones magazine and an analyst for MSNBC. He is the author of three New York Times bestsellers, including Showdown: The Inside Story of How Obama Battled the GOP to Set Up the 2012 Election and Hubris: The Inside Story of Spin, Scandal, and the Selling of the Iraq War (co-written with Michael Isikoff). He is also the author of the biography Blond Ghost: Ted Shackley and the CIA's Crusades and the novel Deep Background.