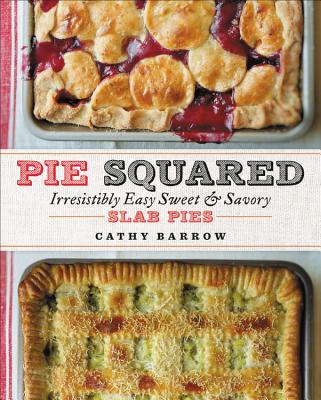 The delicious new food trend of slab pies that makes it easy to serve sweet or savory pastry to a crowd-or just your family!

For those of you who aren't up on your Pinterest food trends, slab pie is just like regular pie-only better (and bigger)! Instead of crimping and meticulously rolling out a round crust, slab pies are an unfussy twist that are perfect for a potluck or dinner party or just a family dinner. Baked on sheet pans, slab pies can easily serve a crowd of people dinner or dessert. Pie Squared includes seventy-five foolproof recipes, along with inventive decoration tips that will appeal to baking nerds and occasional bakers alike. And this fresh, uncomplicated take on pie will surely pique the interest of those who have previously been reluctant to take out their rolling pin.

Barrow didn't invent slab pie, but she definitely thinks outside of the crust. In addition to traditional pie dough, she offers more than a dozen crust recipes-from cracker crusts and cornbread crusts to cookie crusts and cheddar cheese crusts. Using these as a base, Barrow then entices readers with both savory and sweet slab pie creations, with recipes like Spinach, Gorgonzola, and Walnut Slab Pie and Curried Chicken Slab Pie to Sour Cream Peach Melba Slab Pie and Grande Mocha Cappuccino Slab Pie. The first book of its kind, this will appeal to lovers of easy food trends like sheet pan suppers and dump cakes. Don't be surprised when you start spying slab pies at your next potluck!

Cathy Barrow is a freelance food writer, cooking teacher, and food preservation expert. Barrow writes the "BRING IT" column in the Washington Post's food section. Her first cookbook, Mrs. Wheelbarrow's Practical Pantry, won the prestigious IACP award for best single-subject cookbook in 2015. She has written for the New York Times, Garden and Gun, the Local Palate, Saveur, Southern Living, Food52, All Recipes Magazine, NPR, and National Geographic, among others. Cathy lives just outside Washington, D.C. with her husband and two rescued terriers.

My favorite new cookbook of the year . . . These aren't the gooey fruit oozers I associate with the American classic -- in fact, half the recipes are savory, and many of the "Sweetie Pies" don't even involve fruit.
—Hellen McAlpin, The Christian Science Monitor


Barrow devotes an entire, glorious book to the subject of slab pies . . . The most challenging part of this fun and inviting cookbook will be choosing which recipe to make first.
—Publishers Weekly


Pie Squared is a collection of creative and ambitious-yet-approachable recipes that, in aggregate, argue that just about any dish can be turned into a slab pie.
—The Austin Chronicle


[A]n inventive collection of sweet and savory pies baked in rimmed sheet pans. Unlike round pies, slabs have twice as much crust and half as much filling. So pastry lovers can check out the 14 different crust recipes, including one built around caramelized onions and another using hash browns. Ingredients are measured both by volume and weight. Lots of creativity here.—Minneapolis Star Tribune
or support indie stores by buying on
Copyright © 2020 American Booksellers Association