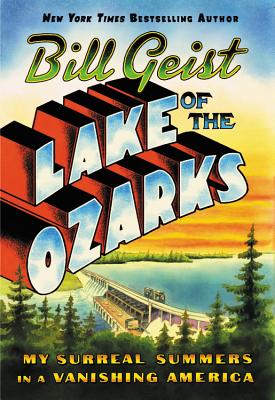 Lake of the Ozarks

My Surreal Summers in a Vanishing America

Beloved TV host Bill Geist pens a reflective memoir of his incredible summers spent in the heart of America in this New York Times bestseller.
Before there was "tourism" and souvenir ashtrays became "kitsch," the Lake of the Ozarks was a Shangri-La for middle-class Midwestern families on vacation, complete with man-made beaches, Hillbilly Mini Golf, and feathered rubber tomahawks. It was there that author Bill Geist spent summers in the Sixties during his school and college years working at Arrowhead Lodge -- a small resort owned by his bombastic uncle -- in all areas of the operation, from cesspool attendant to bellhop.
What may have seemed just a summer job became, upon reflection, a transformative era where a cast of eccentric, small-town characters and experiences shaped (some might suggest "slightly twisted") Bill into the man he is today. He realized it was this time in his life that had a direct influence on his sensibilities, his humor, his writing, and ultimately a career searching the world for other such untamed creatures for the Chicago Tribune, the New York Times, and CBS News.
In Lake of the Ozarks, Emmy Award-winning CBS Sunday Morning correspondent Bill Geist reflects on his coming of age in the American Heartland and traces his evolution as a man and a writer. He shares laugh-out-loud anecdotes and tongue-in-cheek observations guaranteed to evoke a strong sense of nostalgia for "the good ol' days." Written with Geistian wit and warmth, Lake of the Ozarks takes readers back to a bygone era, and demonstrates how you can find inspiration in the most unexpected places.

Praise For Lake of the Ozarks: My Surreal Summers in a Vanishing America…

PRAISE FOR LAKE OF THE OZARKS:

"Readers of Geist's vintage will enjoy sauntering through his formative summers and perhaps recall some of their own on the way."—--Booklist

"A tenderhearted remembrance...Geist's entertaining account of life in a resort town in the 1960s will certainly resonate with folks of his generation, and will offer younger readers a glimpse into a bygone era."—--Publishers Weekly

"Geist's writing is consistently nostalgic as he shows how those carefree summers helped mold him into the man he became. The book is a quick, pleasant read that effectively reflects how his time at the lodge showed him that 'life is more difficult and rewarding and fun when you manage to do things your way.' Old-fashioned, wistful stories that will appeal to fans of Geist's previous books."—--Kirkus

"It is a sure sign that a book is worthwhile if you can sense the author is having fun writing it. [Geist] just sits down to chat a while. More books should celebrate unbridled nostalgia like this one does."

"Funny, poignant, and memorable, Bill Geist's memoir of his summers in the distant Ozarks -- distant in space and now in time -- is an entertaining and illuminating journey into the past of a fascinating man and an always-intriguing country. It's too bad we can't all get a rubber tomahawk and a Lake of the Ozarks ashtray with each purchase of the book, but life's taught us that you can't have everything."—--Jon Meacham, Pulitzer Prize-winning author of The Soul of America

"Lake of the Ozarks is the hilarious account by Bill Geist of his bizarre coming-of-age in a 'different' place and time. The lunacy is infectious. Prepare to laugh, a lot."—--Jane Pauley, host, CBS Sunday Morning

"This book is not affiliated in any way with the show Ozark, streaming now on Netflix...except for the parts you might like. Those we'll take credit for."—--Jason Bateman, Ozark

"Geist has written an amusing, charming tribute . . . an accomplished storyteller has filled this book with vignettes that make this time in American culture come back to life."—St. Louis Post-Dispatch

"In his charming new book, [Geist] has perfectly captured what middle-class life was like in the midcentury American Midwest . . . a meaningful and accurate rendering of times past."—New York Times Book Review

Bill Geist is the New York Times bestselling author of nine books, including City Slickers, Little League Confidential, The Big Five-Oh, Fore! Play!, and Way Off the Road. Geist has won numerous Emmys and in 2011 was awarded a star on the Hollywood Walk of Fame for the hundreds of "singular, informative, entertaining" pieces he has done since joining CBS in 1987. He was awarded the Bronze Star for his service as a combat photographer in Vietnam in 1969. In 2018 he retired from CBS having battled Parkinson's disease for twenty-five years. Geist lives in Riverside, Connecticut, with his wife, Jody. They have two children, Willie and Libby, and four grandchildren.
or support indie stores by buying on