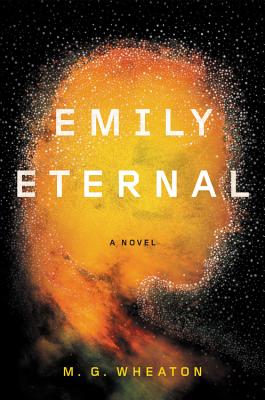 Meet Emily, "the best AI character since HAL 9000" (Blake Crouch). She can solve advanced mathematical problems, unlock the mind's deepest secrets, but unfortunately, even she can't restart the sun.

Emily is an artificial consciousness, designed in a lab to help humans process trauma, which is particularly helpful when the sun begins to die 5 billion years before scientists agreed it was supposed to.

Her beloved human race is screwed, and so is Emily. That is, until she finds a potential answer buried deep in the human genome that may save them all. But not everyone is convinced Emily has the best solution--or the best intentions. Before her theory can be tested, the lab is brutally attacked, and Emily's servers are taken hostage.

Narrowly escaping, Emily is forced to go on the run with two human companions--college student Jason and small-town Sheriff, Mayra. As the sun's death draws near, Emily and her friends must race against time to save humanity. Soon it becomes clear not just the species is at stake, but also that which makes us most human.

"No small feat to make a nonhuman character relatable, but Wheaton manages it with aplomb... cleverly written, with sci-fi concepts that are accessible to nonreaders of the genre. Fans of Andy Weir and Blake Crouch will enjoy the wit and action of Emily's story."—p.p1 {margin: 0.0px 0.0px 0.0px 0.0px; font: 12.0px 'Times New Roman'}Booklist

"Readers will finish this suspenseful speculation about the next step in human evolution hoping that Wheaton has enough material left over for a second foray into speculative fiction, and perhaps even a third and a fourth. Emily Eternal is a novel you'll be glad you read, and M. G. Wheaton is an author who is obviously perfectly comfortable writing in this genre."—p.p1 {margin: 0.0px 0.0px 0.0px 0.0px; font: 12.0px 'Times New Roman'}New York Review of Books

"Wheaton's fast-paced engrossing novel explores the possibility of being able to exist away from our home planet, whether as humans or something new and evolutionarily distinctive."—p.p1 {margin: 0.0px 0.0px 0.0px 0.0px; font: 12.0px 'Times New Roman'}Library Journal

M. G. Wheaton is a screenwriter, producer, and journalist, writing for the Hollywood Reporter, Total Film, and more. He lives in Los Angeles with his wife and children.
Loading...
or support indie stores by buying on