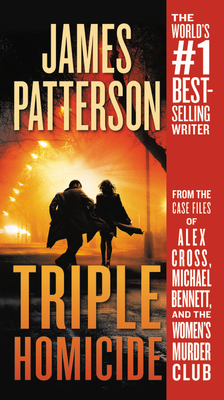 From the case files of Alex Cross, Michael Bennett, and the Women's Murder Club

DETECTIVE CROSS: An Alex Cross Story
An anonymous caller has promised to set off deadly bombs in Washington, DC. A cruel hoax or the real deal? By the time Alex Cross and his wife, Bree Stone, uncover the chilling truth, it may already be too late.... (previously available in print, ebook, and audio)

THE MEDICAL EXAMINER: A Women's Murder Club Story (with Maxine Paetro)
A woman checks into a hotel room and entertains a man who is not her husband. A shooter blows away the lover and wounds the millionairess, leaving her for dead. Is it the perfect case for the Women's Murder Club--or just the most twisted? (previously available in print, ebook, and audio)

MANHUNT: A Michael Bennett Story (with James O. Born)
Someone attacked the Thanksgiving Day Parade directly in front of Michael Bennett and his family. The television news called it "holiday terror"--Michael Bennett calls it personal. The hunt is on.... (previously available in print, ebook, and audio)

James Patterson holds the Guinness World Record for the most #1 New York Times bestsellers. His books have sold more than 350 million copies worldwide. He has donated more than one million books to students and soldiers and has over four hundred Teacher Education Scholarships at twenty-four colleges and universities. He has also donated millions to independent bookstores and school libraries.

Praise For Triple Homicide: From the case files of Alex Cross, Michael Bennett, and the Women's Murder Club…

"James Patterson is the gold standard by which all others are judged."—Steve Berry
or support indie stores by buying on
(This book is on backorder)
Copyright © 2020 American Booksellers Association