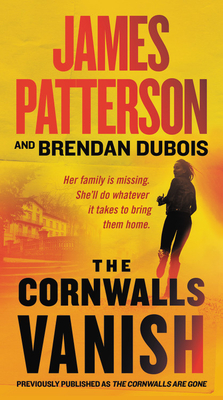 When Captain Amy Cornwall's family goes missing, the Army Ranger will do whatever it takes to bring them home in this cinematic thriller that begins with a mysterious phone call and ends with a twist you'll never see coming.
In her career as an Army intelligence officer, Amy Cornwall has seen haunting sights half a world away. None compare to the chilling scene at her empty Virginia home.
A phone rings with a terrifying ultimatum: locate and liberate an unnamed captive in forty-eight hours, or her kidnapped husband and ten-year-old daughter are dead.
Now, in open defiance of Army Command, Amy must employ her most lethal tactics to save them. To succeed, she must discover not only who dispatched her on this mission, but why. Without her family, she's dead anyway.

James Patterson is the world's bestselling author and most trusted storyteller. He has created many enduring fictional characters and series, including Alex Cross, the Women's Murder Club, Michael Bennett, Maximum Ride, Middle School, and I Funny. Among his notable literary collaborations are The President Is Missing, with President Bill Clinton, and the Max Einstein series, produced in partnership with the Albert Einstein Estate. Patterson's writing career is characterized by a single mission: to prove that there is no such thing as a person who "doesn't like to read," only people who haven't found the right book. He's given over three million books to schoolkids and the military, donated more than seventy million dollars to support education, and endowed over five thousand college scholarships for teachers. The National Book Foundation recently presented Patterson with the Literarian Award for Outstanding Service to the American Literary Community, and he is also the recipient of an Edgar Award and six Emmy Awards. He lives in Florida with his family.
or support indie stores by buying on
Copyright © 2020 American Booksellers Association