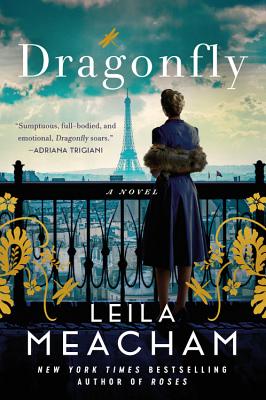 Read the USA Today bestseller from the author of Roses, a "sumptuous, full-bodied, and emotional" novel about five young spies embedded among the highest Nazi ranks in occupied Paris (Adriana Trigiani, NYT bestselling author of Tony's Wife).
At the height of World War II, a handful of idealistic young Americans receive a mysterious letter from the government, asking them if they are willing to fight for their country. The men and women from very different backgrounds -- a Texan athlete with German roots, an upper-crust son of a French mother and a wealthy businessman, a dirt-poor Midwestern fly fisherman, an orphaned fashion designer, and a ravishingly beautiful female fencer -- all answer the call of duty, but each for a secret reason of her or his own. They bond immediately, in a group code-named Dragonfly.
Thus begins a dramatic cat-and-mouse game, as the group seeks to stay under the radar until a fatal misstep leads to the capture and the firing-squad execution of one of their team. But is everything as it seems, or is this one more elaborate act of spycraft?

"Dragonfly is one of those books you cannot put down...A masterpiece of story-telling with greatly written characters during one of the world's worst times with five brave Americans who put country over their own lives."—p.p1 {margin: 0.0px 0.0px 0.0px 0.0px; line-height: 17.0px; font: 14.7px Times; color: #000000}span.s1 {font-kerning: none}Red Carpet Crash

"Set in German-occupied Paris during World War II, this captivating novel stars five young Americans who received mysterious letter asking them to "serve their country." They agree, creating a secret group---code-named Dragonfly---that goes undercover to infiltrate Nazi ranks. But when one of them is captured, they begin to question if things are what they seem. With drama and danger, it's impossible to put down."—p.p1 {margin: 0.0px 0.0px 0.0px 0.0px; font: 15.0px 'Times New Roman'}span.s1 {font-kerning: none}Woman's World

"A riveting read. So many World War II stories are nothing but men and their guns...It's especially refreshing to see a story like this so focused on women who are as capable and gutsy as the men, with Victoria in particular being a standout character....There are more than a few surprises in Dragonfly, and the short, choppy chapters tend to leave you multiple cliffhangers to keep you hooked...As a novel it captures the espionage side of World War II, as well as the men and women who served in secret, with admirable grace and power."—p.p1 {margin: 0.0px 0.0px 0.0px 0.0px; font: 14.0px Times; color: #000000}span.s1 {font-kerning: none}Houston Chronicle

"Meacham hooks the reader in the first paragraph and keeps the pages turning as the characters live on the brink of one potential clandestine calamity after another...Meacham's other historical novels, besides Roses, are Tumbleweeds, Somerset, and Titans. Each is an engaging and powerful tale, but Dragonfly may well be the most thrilling of them all."—p.p1 {margin: 0.0px 0.0px 0.0px 0.0px; font: 14.0px 'Times New Roman'; color: #000000}span.s1 {font-kerning: none}Abilene Reporter News, A "Texas Reads" Pick

"The thrills are tingly rather than electrifying, the leads are superficially satisfying, and the enemies meet their appropriate ends. A long and leisurely spy novel, reminiscent of a 1950s move."—Library Journal

"Dragonfly by Leila Meacham is a spellbinding novel. The story from the very first line pulls readers into the mystery: which of the five American spies embedded in Nazi occupied Paris has survived? The dramatic scenes are riveting as each character plays a cat and mouse game with the Nazis."—p.p1 {margin: 0.0px 0.0px 0.0px 0.0px; font: 12.0px Helvetica}Crimespree

PRAISE FOR PREVIOUS LEILA MEACHAM NOVELS
"The finest historical fiction not only entertains but teaches readers something about an era not their own, and this novel offers a stellar crash course in Texas history...The novel has it all: a wide cast of characters, pitch-perfect period detail, romance, plenty of drama, and skeletons in the closet (literally). Saga fans will be swooning."—Booklist (starred review) (Praise for Titans)

"Roses heralded as the new Gone with the Wind."—USA Today (Praise for Roses)

"As large, romantic, and American a tale as Texas itself."—Booklist (praise for Roses)

"It's been almost 30 years since the heyday of giant epics...but Meacham's debut might bring them back. Readers who like an old-fashioned saga will devour this sprawling novel of passion and revenge."—Library Journal (praise for Roses)

Leila Meacham was a writer and former teacher who lived in San Antonio, Texas. She was the author of the bestselling novels Roses, Tumbleweeds, Somerset, and Titans. For more information, please visit LeilaMeacham.com.
Loading...
or support indie stores by buying on