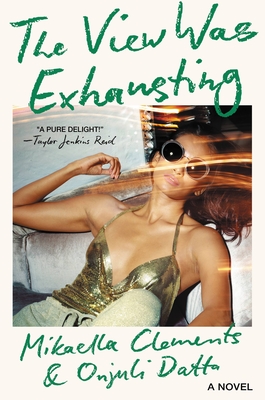 The View Was Exhausting


Faking a love story is a whole lot easier than falling in love . . .

The world can see that international A-list actress Whitman ("Win") Tagore and jet-setting playboy Leo Milanowski are made for each other. Their kisses start Twitter trends and their fights break the internet. From red carpet appearances to Met Gala mishaps, their on-again, off-again romance has titillated the public and the press for almost a decade. But it's all a lie.

As a woman of color, Win knows the Hollywood deck is stacked against her, so she's perfected the art of controlling her public persona. Whenever she nears scandal, she calls in Leo, with his endearingly reckless attitude, for a staged date. Each public display of affection shifts the headlines back in Win's favor, and Leo uses the good press to draw attention away from his dysfunctional family.

Pretending to be in a passionate romance is one thing, but Win knows that a real relationship would lead to nothing but trouble. So instead they settle for friendship, with a side of sky-rocketing chemistry. Except this time, on the French Riviera, something is off. A shocking secret in Leo's past sets Win's personal and professional lives on a catastrophic collision course. Behind the scenes of their yacht-trips and PDA, the world's favorite couple is at each other's throats. Now they must finally confront the many truths and lies of their relationship, and Win is forced to consider what is more important: a rising career, or a risky shot at real love?

The View Was Exhausting is a funny, wickedly observant modern love story set against the backdrop of exotic locales and the realities of being a woman of color in a world run by men.


Praise For The View Was Exhausting…

“The View Was Exhausting is a pure delight! Effortlessly cool, razor sharp, and crazy fun—I couldn’t put it down. It is Notting Hill for 2021, an absolute crowd pleaser.”—Taylor Jenkins Reid, New York Times bestselling author of Daisy Jones & The Six

"An absolutely stellar debut with tension that crackles and prose that sings, The View Was Exhausting is the complex, Hollywood love story we've all been waiting for. Clements and Datta have crafted a book that's as heartfelt and earnest as it is sharp and surprising--I couldn't get enough."

"Married couple Clements and Datta use a playful trope to confront weighty issues in their excellent debut, a romance that's as timely as it is heartfelt.  Readers will come for the swoon-worthy romance and stay for the beautiful prose."

“Clements and Datta give the novel grit, depth, and originality as they explore how Win must balance her need for self-preservation with her desire to expose the intersection of racism and sexism in the film industry. This will-they, won’t-they journey is packed with emotional resonance.”

"The View Was Exhausting sweeps you up into the tilt-a-whirl of Hollywood relationships. This richly drawn romance is, crucially, also a journey through the unjust rules forced upon women—especially women of color— who dare to play the fame game. It's timely, touching, and a tantalizing love story."—Jessica Morgan & Heather Cocks, bestselling authors of The Royal We and The Heir Affair

“I read it all in one morning and couldn't put it down once, which frankly was of huge disadvantage to me because I had work to do. The View Was Exhausting is enormously sophisticated, tension held like a net, as it slowly holds the reader closer and closer to a fire, and I laughed many times. It’s an absolute tour de force, and Win is now one of my new favorite protagonists ever.“

Mikaella Clements and Onjuli Datta are the co-authors of The View Was Exhausting. Mikaella's writing has appeared in the New York Times, the Guardian, Hazlitt, Catapult, and more, and she was shortlisted for the 2019 Galley Beggar Press Prize and the 2018 Bridport Short Story Prize. Onjuli's work has been published in The Billfold and Daddy magazine. Mikaella is originally from Australia and Onjuli from England; they are married and live together in Berlin.