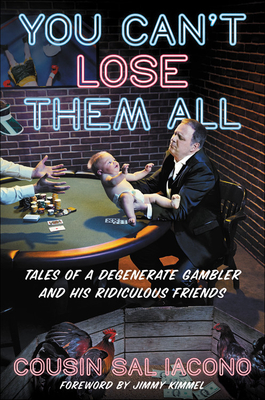 You Can't Lose Them All

Tales of a Degenerate Gambler and His Ridiculous Friends

In this informative and entertaining book, learn from Cousin Sal how not to gamble your life away -- along with many other life lessons -- so you don't have to learn the hard way.
Over the last forty years, Cousin Sal has made bets with doctors, lawyers, teachers, agents, bookies, writers, comedians, radio DJs, tv producers, baseball players, front office executives, bandleaders, movie stars, publicists, weed lab owners, hedge fund operators, and even professional wrestlers. From his early days growing up in Brooklyn and Long Island flipping baseball cards to now hosting podcasts and TV shows and managing several offshore accounts we don't talk about, Cousin Sal has truly become the average American sports fan's go to source for gambling tips.
So here's how not to do it . . .
With hilarious tales of love and loss, winning and (a lot) of losing, crazy family and fatherhood, and a life saga that inspired the Phil Collins' song, "Against All Odds," Cousin Sal has now written THE Vegas super-system, MIT-algorithmic, sharp-approved book for how to gamble like a pro -- or at least not how not to go broke and lose your kids to Child Protective Services.


Praise For You Can't Lose Them All: Tales of a Degenerate Gambler and His Ridiculous Friends…

"If you think the way I do, then you must be asking yourself if this truly is the most ridiculous cover for a book you've ever seen. Just wait...when you open the book, it actually makes the cover look normal. It's not dark yet, but it's getting there. Cousin Sal is a very smart and brilliant man with as humble a heart as I've been around. He wants to make others happy and sometimes he does with his checkbook. But I am truly lucky to call him a friend. For life. You will love this book."—Tony Romo

"For the last two decades, Cousin Sal has been the Gambling Butch Cassidy to my Gambling Sundance Kid -- and that's a crucial analogy, because they both died at the end of the movie."—Bill Simmons

"I swear to God you little shit, if you wrote anything stupid about me I’ll kill you."—Aunt Chippy

"Sal's a good father and husband, and I have never seen him take a drink. But he makes up for it by being the most degenerate gambler I have ever seen."—Johnny Knoxville

“Sal has embarrassed me on live television, in front of Jon Hamm, in restaurants, on the golf course, etc. The fact that I am still here recommending this book is a testament to how great a friend he is when he's not making my life miserable. I've never met a man that's as mad about sports as he is and I think he's endured enough pain, the least we can do is read about it. Also, Jon, if you're reading this: I'm not crazy!”—Rachel Bonnetta

Sal Iacono is an American attorney, comedian, writer, and game show host. He is known for his hidden camera pranks on the late night television show Jimmy Kimmel Live!. He has a weekly comedy bit on the Thursday Night NFL Pre-Game show on Fox and is a co-host of Fox Sports first ever daily sports gambling show Lock It In. He hosts the Against All Odds podcast on The Extra Points Podcast Network and guesses the weekly NFL lines with Bill Simmons on The Bill Simmons Podcast. He is Jimmy Kimmel's real-life cousin, hence his nickname Cousin Sal.
Loading...
or support indie stores by buying on