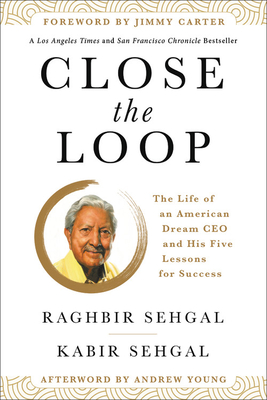 The inspiring true story of one man's journey to achieve the American Dream, and the wisdom he gained about what it takes to find success.

Raghbir (R.K.) Sehgal left his native India as a teenager with little money in his pocket. He worked factory jobs in the United Kingdom and eventually moved to the United States. Living in the Deep South in the 1960s, Sehgal experienced discrimination and that redoubled his desire to succeed. He started as a junior engineer at Law Engineering and rose to become Chairman & CEO. Close the Loop is his story told through the voice of his son Kabir Sehgal. This is a profound and personal meditation on hope, persistence, diligence, and resilience. Raghbir also shares his five lessons for success, which you can use to optimize your life.

Raghbir (R.K.) Sehgal was the chairman & CEO of Law Companies, which was one of the largest global engineering firms in the United States with one hundred offices around the world. He later served as CEO of H. J. Russell & Company. He was the chairman and commissioner of the Georgia Department of Industry, Trade, and Tourism. He has served as Chairman of Smart Fuel Cell and Primacy International. He has served on many boards including Northside Hospital, The Carter Center Board of Advisors, and First Data's International Advisory Board. He graduated from Auburn University. He is based in Atlanta.

Kabir Sehgal is a New York Times and Wall Street Journal bestselling author of fourteen books including Coined and Fandango at the Wall. With his mother Surishtha, he has written several children's books such as A Bucket of Blessings and Festival of Colors. He is a multi-GRAMMY Award winner. He graduated from Dartmouth College and the London School of Economics.