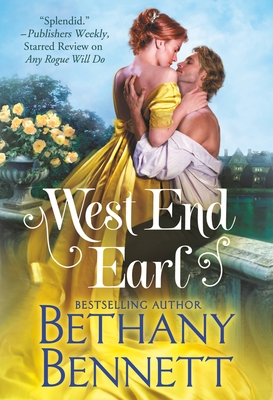 From the series guaranteed to "win the hearts of Regency fans” comes a story of secret identities, unlikely love, and forbidden romances that will warm even the coldest of hearts (Publishers Weekly).

While most young ladies attend balls and hunt for husbands, Ophelia Hardwick has spent the last ten years in disguise. As the land steward for the Earl of Carlyle, she’s found safety from the uncle determined to kill her and freedoms a lady could only dream of. Ophelia’s situation would be perfect—if only she wasn’t hopelessly attracted to her employer.

Calvin, Earl of Carlyle, is determined to see his sister married this season. And he’ll do it with the help of his trusted right-hand man. But when he finds out Ophelia's secret, and that her life is in danger, his priorities change. Their attraction is passionate, all-consuming, and if they aren’t careful, it could turn downright deadly—for both of them.

"Packed with disguises, debts, and debutantes, this delightful Regency does not disappoint."—Publishers Weekly, starred review

"In [a] splendid Regency-set debut . . . Bennett turns a spotlight on the class distinctions and gender restrictions of 1819 England, with a formidable leading lady and a swoon-worthy hero with lower-class roots. Filled with gripping drama, strong characters, and steamy seduction, this tantalizing story is sure to win the hearts of Regency fans."—Publishers Weekly, starred review, on Any Rogue Will Do

"Everything I adore in a Regency--wit, steam, and heart!"—Grace Burrowes, New York Times bestselling author

"A beautiful tale that weaves second chances, genuine characters, and heartfelt emotion into a satisfying happily-ever-after."—Kelly Bowen on Any Rogue Will Do

Bethany Bennett grew up in a small fishing village in Alaska where required learning included life skills like cold-water survival, along with several other subjects that are utterly useless as a romance writer. Eventually settling in the Northwest with her real-life hero and two children, she enjoys mountain views from the comfort of her sofa, wearing a tremendous amount of flannel, and drinking more coffee than her doctor deems wise.
Loading...
or support indie stores by buying on