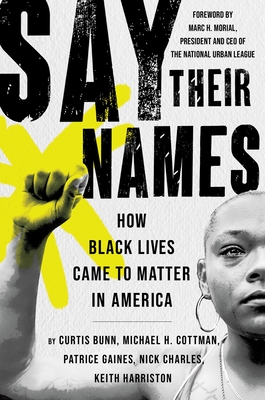 How Black Lives Came to Matter in America

An incisive, gripping exploration of the forces that pushed our unjust system to its breaking point after the death of George Floyd and a definitive guide to America's present-day racial reckoning.
For many, the story of the weeks of protests in the summer of 2020 began with the horrific nine minutes and twenty-nine seconds when Police Officer Derek Chauvin killed George Floyd on camera, and it ended with the sweeping federal, state, and intrapersonal changes that followed. It is a simple story, wherein white America finally witnessed enough brutality to move their collective consciousness. The only problem is that it isn't true. George Floyd was not the first Black man to be killed by police—he wasn’t even the first to inspire nation-wide protests—yet his death came at a time when America was already at a tipping point.

In SAY THEIR NAMES, five seasoned journalists probe this critical shift. With a piercing examination of how inequality has been propagated throughout history, from Black imprisonment and the Convict Leasing program to long-standing predatory medical practices to over-policing, the authors highlight the disparities that have long characterized the dangers of being Black in America. They examine the many moderate attempts to counteract these inequalities, from the modern Civil Rights movement to Ferguson, and how the killings of George Floyd, Breonna Taylor and others pushed compliance with an unjust system to its breaking point. Finally, they outline the momentous changes that have resulted from this movement, while at the same time proposing necessary next steps to move forward.

With a combination of penetrating, focused journalism and affecting personal insight, the authors bring together their collective years of reporting, creating a cohesive and comprehensive understanding of racial inequality in America.


Praise For Say Their Names: How Black Lives Came to Matter in America…

"By bringing together five journalists who each offer a take on the buildup to that summer, the book functions as a time capsule that hopefully will be useful to future historians as they assess not just the impact of the protests but also the history of the police violence, and the organizing, that led to them."—Washington Post

“Sometimes a seed falls
And luckily it begins
To rain. Some folk complain
But the rest of us watch
The bud grow and the mint
Cleanse the air
And we SAY THEIR NAMES
About a wonderful
book”—Nikki Giovanni

“Say Their Names is essential reading for anyone who wants to understand where we are in America’s long struggle with racism and white supremacy – and how we got here. Five award-winning journalists give us the best, most comprehensive portrait to date of the Black Lives Matter moment that was ignited by the murder of George Floyd. They give us historical perspective, intimate portraits, fact-filled examination of the issues that face Black communities across the country and a sure sense of the way forward. It is not the “first rough draft of history,” but rather a polished assessment of recent history that will stand the test of time.”—Eugene Robinson, Pulitzer Prize winning Washington Post columnist and MSNBC analyst

“To read Say Their Names is a journey into the collective and immediate consciousness of Black Lives Matter. The book skirts across the authors’ memory and reader’s current perspectives on race and what we know of America. In this book, Patrice Gaines, Curtis Bunn, Nick Charles, Michael H. Cottman, and Keith Harriston are speaking to the current moment and the long Civil Rights Movement. It is here, in the angst of these moments and the awareness of our collective past that we can predict our interconnected futures."—DaMaris B. Hill, author of A Bound Woman Is a Dangerous Thing

“This book tracks the fascinating evolution of one of the world's most powerful movements and highlights the crushing racism that has made that movement so utterly necessary. Say Their Names is a timely, deeply engaging read."—Nathan McCall, New York Times bestselling author of Makes Me Wanna Holler: A Young Black Man in America.

“A thoughtful assessment of the Black Lives Matter movement that illuminates the work still left to do. Recommended for readers newly interested in antiracist activism.”—Library Journal

"Throughout [SAY THEIR NAMES], the authors skillfully draw on interviews with protestors, clergy members, scholars, and community organizers, and offer brisk yet insightful accounts of the Jim Crow era, the Tuskegee syphilis experiment, and other historical episodes. The result is an accessible introduction to the latest chapter in the ongoing struggle for civil rights in America."—Publishers Weekly

"[A] gripping, thought-provoking survey of the forces that pushed our unjust system to its breaking point following the murder of George Floyd. Penned by a powerhouse of five expert Black journalists, Say Their Names is a deep dive exploration of the historical context behind America’s original sin."—Black Enterprise

Curtis Bunn is an award-winning journalist at NBC News BLK who has written about race and sports and social and political issues for more than 30 years in Washington, D.C., New York, and Atlanta. Additionally, he is a best-selling author of ten novels that center on Black life in America.

Michael H. Cottman is an author and award-winning journalist. He served as Program Editor for NBCU Academy, a journalism education and training initiative with the NBCUniversal News Group Diversity, Equity and Inclusion Team. He is also the former Editorial Manager of NBCBLK, a division of NBC News Digital. Cottman is a former reporter for The Washington Post and The Miami Herald, among other publications. Cottman, who has received numerous awards, was also part of a Pulitzer Prize-winning team for Newsday's coverage of a deadly subway crash in New York in 1992. Cottman has authored, co-authored and edited eight non-fiction books and he appeared on The Oprah Winfrey Show to discuss his work. Patrice Gaines is author of the memoir Laughing in the Dark (Random House, 1995) and Moments of Grace (Random House, 1998). Gaines was a reporter at the Washington Post for 16 years. While at the Post, she was a member of a team nominated as a finalist for the Pulitzer Prize. She was awarded a Soros Justice Media Fellowship to write a series of columns about the impact of incarceration on the Black community. At age 21, Gaines was found guilty of drug charges and forever labeled a “convicted felon.” In the decades since, she has spoken and taught in prisons and jails, and also lectured at colleges and conferences on the brutality and failure of America’s criminal justice system. Gaines is also a justice advocate and abolitionist.
Nick Charles has reported, written, and edited for various media at the local and national levels. He has been a reporter/writer and contributor to the Daily News, People, NPR, the Washington Post, The Undefeated, as well as several other publications. He was the Editor‑in‑Chief of AOL Black Voices and the VP of Digital Content for BET.com. Charles is the Managing Director of Word In Black, a collaborative of 10 Black-owned media and an editor and spokesperson for Save Journalism Project. Keith Harriston is a writer based in Washington, D.C., who worked for 23 years as a senior newsroom manager, department editor, investigative reporter, and beat reporter covering public safety policy at The Washington Post. As a reporter at The Post, Harriston twice was a nominated finalist by the Pulitzer Prize Board. Since leaving The Post, Harriston has taught journalism at American University, Howard University, and George Washington University, where he currently is a professorial lecturer in journalism.