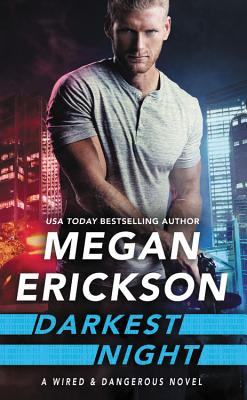 Bodyguard Jock Bosh has one job: keep Fiona Madden safe. Safe from the men who've been hunting her. Safe from the bastard responsible for ruining her life. And with the attraction sizzling white-hot between them, that means keeping Fiona safe from him too.

Fiona has spent the past decade on the run. Her survival is the single greatest weapon she's had against the men out to destroy her. Until Jock. Now, with him by her side, she finally has a chance to bring them down. But when her enemies make their next move and Jock puts himself in the line of fire, Fiona realizes that there's more at stake than just her life - she's also risking her heart.

Megan Erickson is a USA Today bestselling author of romance that sizzles. Her books have a touch of nerd, a dash of humor, and always have a happily ever after. A former journalist, she switched to fiction when she decided she likes writing her own endings better.

She lives in Pennsylvania with her very own nerdy husband and two kids. Although rather fun-sized, she's been told she has a full-sized personality. When Megan isn't writing, she's either lounging with her two cats named after John Hughes characters . . . or thinking about writing.

"Erickson follows Zero Hour with a first-rate romantic thriller that has adrenaline to spare."—PublishersWeekly.com

"I'm a fan of romances in which the power dynamic is basically level from the very start. This book 100% fit that bill and it gave me all the feels. Jock may be a complete alpha and Fiona's ultimate protector but she, in turn, has the power to level him with just a glance. These two kick some serious ass."—BookRiot.com

"The suspense is edgy and the romance is hot... Erickson's start to her Wired & Dangerous series is an unusual and exciting work of romantic suspense."—Christie Ridgway, BookPage on Zero Hour

"The first in Erickson's Wired & Dangerous romantic suspense series roars out of the gate and doesn't let up. This is a highly enjoyable romantic thriller."
—
Publishers Weekly on Zero Hour

"If you want action, dangerous heroes, brave heroines, sweet and steamy romance, and a very good ending, then get your hands on ZERO HOUR by Megan Erickson."—FreshFiction.com on Zero Hour

"Take a wild ride into the dark underworld of the internet with a sexy romance series full of intrigue and tension. The high-stakes world of computer hacking has never looked so seductive and scorching!"—Rebecca Zanetti, New York Times bestselling author

"The suspense and romance are well-balanced... Great sexual tension, as Roarke finally admits his true feelings for Wren. Oh Roarke, I love you so much! I can't get enough of him!"—Smexybooks.com on Zero Hour
or
Not Currently Available for Direct Purchase
Copyright © 2020 American Booksellers Association