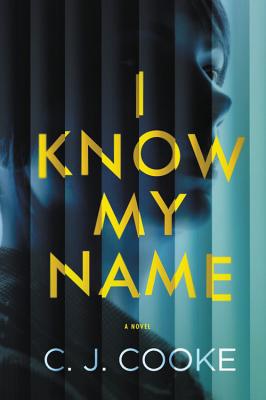 I Know My Name (Hardcover)

A woman with no name. A wild, abandoned island. A family desperate for answers. A debut thriller like no other.

On a small Greek island, a woman comes ashore with no memory of who she is, where she's from, or how she came to be shipwrecked there. Worse, she has no way of leaving. As she's nursed back to health by the island's only inhabitants, four friends on an annual retreat, she detects tensions between the group that suggest not all is quite as it seems. Her new acquaintances each appear to be hiding something--something that may relate to the mystery of her identity.

Meanwhile, in a pretty suburb on the outskirts of London, Eloise, the mother of a newborn and a toddler, vanishes into thin air. Her husband, Lochlan, is desperate to find her--but as the police look into the disappearance, it becomes clear that Lochlan and Eloise's marriage was not the perfect union it appeared.

As Lochlan races to discover his wife's whereabouts, Eloise enacts an investigation of her own. What both discover will place lives at risk and upend everything they thought they knew about their marriage, their past, and what lies in store for the future.

C.J. Cooke is a creative writing professor at Glasgow University. I KNOW MY NAME is her debut psychological thriller. She lives and writes on the coast of England.

Praise For I Know My Name…

"C. J. Cooke's I KNOW MY NAME is an astonishing thriller of lost memories, a lost wife and mother, and remarkable discoveries. With resonant themes, gorgeous writing and a stunning conclusion, this novel has catapulted onto my shortlist of the best suspense novels I've read all year."—Chevy Stevens, New York Times bestselling author of Still Missing

"Smart and intense, C. J. Cooke's I KNOW MY NAME is a masterfully written thriller that will lead you on a surprising journey. You won't be able to put this captivating book down."—Sara Blaedel, #1 international bestseller of the Louise Rick series

"Two stories-- two baffling mysteries... And when they come together, that's when the surprises really start. Gripping and tense. This is a book you will recommend to your friends."—R.L. Stine, New York Times bestselling author of the Goosebumps and Fear Street series

"An atmospheric, mysterious and intense read that resonates long after you turn the last page. It's a stunning psychological thriller, rich with mystery and full of heart."
—
C. L. Taylor, internationally bestselling author of The Lie and Before I Wake

"Intense, thrilling and layered with issues of modern life, this is grip-lit at its best."
—
ELLE (UK)

"Cooke's concern for her subject matter as well as her characters shines through her crisp writing, and her novel takes on a layer of emotion not always found in psychological thrillers. A fast-paced novel that deftly strikes at the heart of what it means to survive traumatic personal and familial ruptures."—Kirkus Reviews

"Cooke keeps the suspense high as the endangered castaway struggles to survive while back in London Eloïse's family hunts for her with increasing desperation."—Publishers Weekly

"This psychological-suspense debut will appeal to fans of Mary Kubica, S. J. Watson, and B. A. Paris."—Booklist
or
Not Currently Available for Direct Purchase
Copyright © 2020 American Booksellers Association