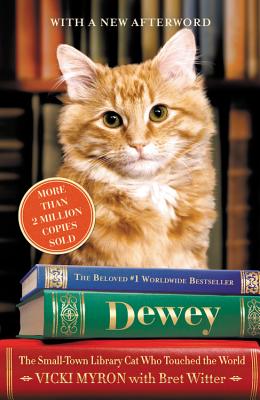 Experience the uplifting, "unforgettable" New York Times bestseller about an abandoned kitten named Dewey, whose life in a library won over a farming town and the world -- with over 2 million copies sold! (Booklist)

Dewey's story starts in the worst possible way. On the coldest night of the year in Spencer, Iowa, at only a few weeks old--a critical age for kittens--he was stuffed into the return book slot of the Spencer Public Library. He was found the next morning by library director Vicki Myron, a single mother who had survived the loss of her family farm, a breast cancer scare, and an alcoholic husband. Dewey won her heart, and the hearts of the staff, by pulling himself up and hobbling on frostbitten feet to nudge each of them in a gesture of thanks and love. For the next nineteen years, he never stopped charming the people of Spencer with his enthusiasm, warmth, humility (for a cat), and, above all, his sixth sense about who needed him most.

Vicki Myron was born on a farm fifteen miles from Spencer, Iowa. At the age of thirty-four, after a failed marriage, single motherhood, and a stint on welfare, she graduated summa cum laude from Mankato State University and has a masters degree from Emporia State University. She worked at the Spencer Public Library for twenty-five years, the last twenty as director. She lives in Spencer, Iowa. Bret Witter is a book editor and professional writer. Raised in north Alabama, he currently lives in Louisville, Kentucky, with his wife, two children and his fourteen-year-old cat Kiki. His other cat, Feasor, died four days after the completion of this book.

Praise For Dewey: The Small-Town Library Cat Who Touched the World…

"Iowa has produced great Hall of Famers, like baseball's Bob Feller. Iowa has now produced a true feline Hall of Famer, a loveable library celebrity named Dewey, who put Spencer, Iowa, on the international map. This book is a purring good read, whether you are a cat lover, or not."—Jim Fanning, former Major League Baseball player and manager

"This Librarian thought DEWEY was the Cats Meow! It will make you laugh and cry so much that you will want to Readmore Books! I adored DEWEY. There are few books that are as memorable; DEWEY the small town library cat will be one of those books that will be etched in my memory for a lifetime."—Jennifer Teitelbaum, San Diego County Library (San Diego, CA)

"DEWEY is charming, lovely, and moving. It's about life and death and small-town values and, above all, love. Norton would have liked Dewey--the cat and the book-- immensely."—Peter Gethers, author of THE CAT WHO WENT TO PARIS and THE CAT WHO'LL LIVE FOREVER

"I was enchanted with antics of DEWEY, but also moved by Vicki's personal story and the wonderful presentation of my hometown...Whether you are a cat person, a book lover, or curious about life in small-town America, this story has something for everyone."—Bonnie Mauer, Anderson's Bookshops (Naperville, IL)

"By the end, I was openly weeping. Fellow cat ladies and ladies, put your pretensions aside and give this one a chance."—BookPage
or support indie stores by buying on
(This book is on backorder)
Copyright © 2020 American Booksellers Association