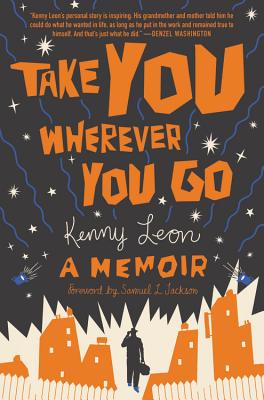 Take You Wherever You Go (Hardcover)

From Tony Award-winning director and recipient of the prestigious Mr. Abbott Award, Kenny Leon, comes a powerful memoir of the lessons he has learned on his incredible life journey.

When Kenny Leon's grandmother told him to "take you wherever you go," she could hardly have anticipated that he would establish himself as one of Broadway's most exciting and acclaimed directors. But through years of hard work, Kenny would migrate from a small wooden house in rural Florida to the Tony Awards' stage, where he would win Best Direction of a Play for his 2014 revival of A Raisin in the Sun.

In Take You Wherever You Go, Leon reflects on the pillars of wisdom he learned every step of the way from the most important people in his life--from his grandmother's sagacious and encouraging motivations to the steady hand of his mother to the deep artistic and social influence of iconic American playwright August Wilson.

Take You Wherever You Go is a poignant, ruminative, and inspirational memoir that empowers you to be true to yourself as you navigate your own path.

Kenny Leon is a Tony Award-winning Broadway stage and television director who is the recipient of numerous awards including the 2010 Julia Hansen Award for Excellence in Directing by the Drama League of New York and the prestigious "Mr. Abbott" Award. His Broadway credits include the revivals of A Raisin in the Sun, Fences, Children of a Lesser God, The Mountaintop, Stick Fly, and Holler If Ya Hear Me. His television work includes episodes of the Dynasty reboot, Steel Magnolias, The Wiz Live!, and Hairspray Live!.

Praise For Take You Wherever You Go…

"Kenny Leon's personal story is inspiring. His grandmother and mother told him he could do what he wanted in life, as long as he put in the work and remained true to himself. And that's just what he did."—Denzel Washington

"As a director, Kenny Leon says, 'Where is it you'd like to go?' and then supports your journey in achieving that goal. In his book, Kenny tells how he came to be that kind of director, that kind of man."—Harvey Fierstein

"Kenny Leon's candor and generosity of spirit is on remarkable display as he so eloquently shares the inspiration gleamed from the wise counsel of his life's most influential teachers. A true testament of the man I adore and am proud to call my life-long friend."
—Angela Bassett
or
Not Currently Available for Direct Purchase
Copyright © 2020 American Booksellers Association