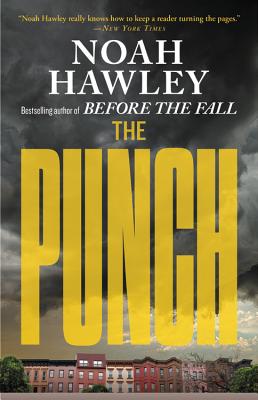 "No reader should pass this by."
-- ANDREW SEAN GREER, PULITZER PRIZE-WINNING AUTHOR OF LESS
WITH A FOREWORD BY THE AUTHOR
Joe Henry was the glue that held his family together. Now he is dead, and his wife and sons are coming together for one final journey to scatter his ashes. First, however, his loved ones have some things to work out.
David, the older son, believes that any minute his life is going to fall apart and everyone he loves will leave him. His brother Scott can't shake the belief that at heart, people are inherently rotten. Doris, their mother, just doesn't believe in anything anymore.
Wickedly funny and biting, THE PUNCH is an essential exploration of modern American grief, family violence, and redemption from the bestselling author of BEFORE THE FALL and creator of the Emmy award-winning series FARGO.
"Noah Hawley really knows how to keep a reader turning the pages."
--New York Times

Noah Hawley is an Emmy, Golden Globe, PEN, Critics' Choice, and Peabody Award-winning author, screenwriter, and producer. He has published four novels and penned the script for the feature film Lies and Alibis. He created, executive produced, and served as showrunner for ABC's My Generation and The Unusuals and was a writer and producer on the hit series Bones. Hawley is currently executive producer, award-winning series, Fargo, and Legion from FX Productions and Marvel Television.

Praise For The Punch…

"Noah Hawley is one of our great young writers, able to balance breakneck plotting with real emotion, and with THE PUNCH he has struck gold. No reader should pass this by."—Andrew Sean Greer, Pulitzer Prize-winning author of LESS

"Noah Hawley writes irresistible fiction. I devoured THE PUNCH in three hours flat, stopping only to marvel over the freshness of a phrase or the effortless wit of a line of dialogue."—Mary Roach, author of STIFF and BONK

"Like an American Martin Amis, Hawley expertly rides the line between hilarity and horror and deftly mines his characters' secret longings-their shame, hope, and desire. At times the story is so exquisitely uncomfortable you'll put your hands over your eyes, but you'll end up peeking between your fingers because it's so wickedly good."—Tom Barbash, author of THE LAST GOOD CHANCE and ON TOP OF THE WORLD