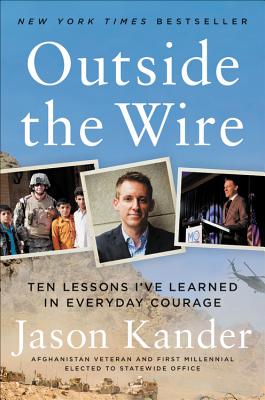 A smart and revealing political memoir from a rising star of the Democratic Party.

"In life and in politics, the most important work is often that which happens outside the wire."

Going "outside the wire" -- military lingo for leaving the safety of a base -- has taught Jason Kander to take risks and make change rather than settling for the easy option. After you've volunteered to put your life on the line with and for your fellow Americans in Afghanistan, cynical politics and empty posturing back home just feel like an insult.

Kander understands that showing political courage really just means doing the right thing no matter what. He won a seat in the Missouri Legislature at age twenty-seven and then, at thirty-one, became the first millennial in the country elected to statewide office. An unapologetic progressive from the heartland, he rejected conventional political wisdom and stood up to the NRA in 2016 with a now-famous Senate campaign ad in which he argued for gun reform while assembling a rifle blindfolded.

That fearless commitment to service has placed him at the forefront of a new generation of American political leaders. In his final interview as President, Barack Obama pointed to Kander as the future of the Democratic Party.

"...do something rather than be something..."

In Outside the Wire, Jason Kander describes his journey from Midwestern suburban kid to soldier to politician and details what he's learned along the way: lessons imparted by his dad on the baseball diamond, wisdom gained outside the wire in Kabul, and cautionary tales witnessed under the Missouri Capitol dome. Kander faced down petty tyrants in Jefferson City -- no big deal after encountering real ones in Afghanistan. He put in 90,000 miles campaigning for statewide office in 2012 -- no sweat compared to the thirty-seven miles between Bagram Air Base and Camp Eggers. When confronted with a choice between what's easy and what's right, he's never hesitated.
Outside the Wire is a candid, practical guide for anyone thinking about public service and everyone wishing to make a difference. It's a call to action, an entertaining meditation on the demands and rewards of civic engagement, and, ultimately, a hopeful vision for America's future -- all seen through the eyes of one of its most dedicated servants.

Praise For Outside the Wire: Ten Lessons I've Learned in Everyday Courage…

"Jason Kander is in the vanguard of a new generation of public servants working tirelessly to realize the promise of our country for every American. OUTSIDE THE WIRE vividly captures his experience, energy, ideas, and vision for the future of our democracy."—p.p1 {margin: 0.0px 0.0px 0.0px 0.0px; text-align: center; font: 12.0px Arial}Senator Cory Booker

"When we asked President Obama who he saw as the future of the Democratic Party, the first name out of his mouth was Jason Kander's. When you read this book, you'll understand why."—p.p1 {margin: 0.0px 0.0px 0.0px 0.0px; text-align: center; font: 12.0px Arial}Dan Pfeiffer, cohost of Pod Save America

"In the military, in politics, and in life, Jason Kander has always lived 'outside the wire,' and his new book challenges us all to do the same. Whether you're a longtime activist, or joining the work for social justice for the first time, OUTSIDE THE WIRE will inspire you to do more, and take joy in the many others who are, as well. The most important leadership in our country right now is coming not from Washington, DC, but from Americans everywhere who are moving our country forward. As Jason writes, these are the times to grab an oar."—p.p1 {margin: 0.0px 0.0px 0.0px 0.0px; text-align: center; font: 12.0px Arial}Cecile Richards, former president of Planned Parenthood Federation of America

"This book pushed me to reflect on how I'm contributing and how I can be better. Jason has perfectly woven gripping stories into life-altering lessons. Amazing!"—p.p1 {margin: 0.0px 0.0px 0.0px 0.0px; text-align: center; font: 12.0px Arial}Symone Sanders, CNN political commentator

"After reading this book, I conclude that Jason Kander is too funny and too smart to be in politics. His motives are suspect, and he should be removed from public service immediately."—p.p1 {margin: 0.0px 0.0px 0.0px 0.0px; text-align: center; font: 12.0px Arial}Jimmy Kimmel, host of Jimmy Kimmel Live!

"At a time when our boys and young men are in desperate need of healthy male role models in media and politics, Jason Kander has written the perfect book. His collection of stories shows that a man can be strong without being a bully, tough without being cruel, and a leader without sacrificing vulnerability, compassion, and empathy."—p.p1 {margin: 0.0px 0.0px 0.0px 0.0px; text-align: center; font: 12.0px Arial}Cleo Wade, bestselling author of Heart Talk: Poetic Wisdom for a Better Life

"[A] magic combination of authenticity, principle, and humor. Kander seems like the rare politician you might actually want to have a beer with; if you can't, this book is the next best thing."—Kirkus

"The rising Democratic star that everyone is talking about has written the book that everyone will be talking about. Some sixty-three years after Profiles in Courage, Jason Kander, a post-9/11 veteran, shares his observations about the role of what he calls 'everyday courage' in the military, in our daily lives and, yes, in our politics. Written with equal parts humor and humility, Jason and his book are the antidote to the cynicism that pervades our discourse. It's the rare book that will leave readers across the ideological spectrum optimistic about the future of our country."—p.p1 {margin: 0.0px 0.0px 0.0px 0.0px; line-height: 18.0px; font: 15.0px Tahoma; color: #212121; -webkit-text-stroke: #212121}span.s1 {font-kerning: none}Josh Earnest, former White House press secretary under President Barack Obama

A husband, a father, a former Army Captain who served in Afghanistan, and Missouri's former Secretary of State, Jason Kander is the president of Let America Vote. The first millennial in the country to be elected to statewide office, he started Let America Vote to fight back against voter suppression across the country. The Democratic National Committee appointed Jason, who in June POLITICO called "the hottest star in Democratic politics," to chair the Commission to Protect American Democracy from the Trump Administration. Jason's Crooked Media-backed podcast, Majority 54, debuted at No. 1. Jason is a graduate of American University and Georgetown Law School. He lives in Kansas City with his wife, Diana, an entrepreneur, and their four-year-old son True.
Loading...
or
Not Currently Available for Direct Purchase