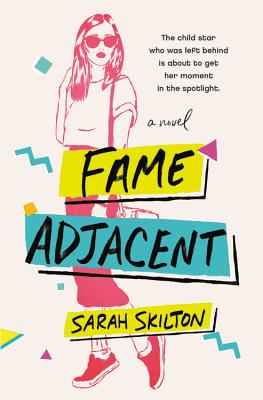 Take this "fun, entertaining read with a sweet romance" to the beach! Can anything go wrong with a former child star's quest to set the record straight, her cross-country road trip with a handsome yet infuriatingly level-headed co-pilot, and an awkward confrontation with famous ex-friends? (HelloGiggles)
Holly Danner has a complicated relationship with fame. It's not easy being the only cast member of a 1990s song-and-dance show who didn't become famous. When she was eleven, she used to do anything for a laugh (or at least a laugh-track) on "Diego and the Lion's Den." If she talked about it--which she almost never does--Holly might explain how her childhood best friends came to dominate the worlds of pop music, film, and TV while she was relegated to a few near-misses and a nanny gig for her niece. She'd even be telling the truth about making peace with the whole thing years ago.
But when she finds out there's a 25th anniversary for the show planned--a televised reunion, clip show, and panel--and she wasn't invited, it's time for an impromptu road trip to crash the event and set the record straight. Three problems: she's currently in Internet Rehab (perhaps she's not quite as well-adjusted as she believes...), she has no cash, and the only person who can get her across the country in time is Thom Parker, a handsome, infuriatingly level-headed patient who doesn't think she should confront her famous ex-friends.
FAME ADJACENT is a contemporary, realistic, and humorous look at love, friendship, and fame, as seen through the eyes of a girl who lived it--from the sidelines.

"The premise is comedic, but the underlying message about social media and stardom is serious and powerful. In addition to cheering on Holly and Thom's romance, readers will feel abundant sympathy for Holly and hope she finds her own success."
—Publisher's Weekly (starred review)

"FAME ADJACENT is hilarious, smart, and compulsively readable. You'll fall in love with Holly Danner."
—Dana Schwartz, author of Choose Your Own Disaster

"Through Fame Adjacent's comedic premise comes a heart-rending examination of what makes up a good life - if it's fame (or internet fame), or if it's something that can't be measured so neatly."—Refinery29

"Fame Adjacent is a spectacular and realistic look at striving for what we know we deserve in life and career."—Women.com

"A fun, entertaining read with a sweet romance to boot."
—HelloGiggles

Sarah Skilton is a book blogger with Barnes & Noble as well as the author of two young adult novels, Bruisedand High & Dry. Her first adult novel, Club Deception, was published by Grand Central in 2017.
Loading...
or support indie stores by buying on