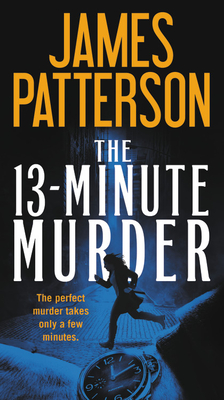 What do a psychiatrist, a mother, and an expert hitman have in common? Their time is running out in these three fast-paced thrillers from the World's #1 Bestselling Writer, James Patterson.
DEAD MAN RUNNING: Psychiatrist Randall Beck specializes in PTSD cases--and his time is limited. Especially when he uncovers a plot to kill a presidential candidate.

113 MINUTES: Molly Rourke's son has been murdered--and she knows who's responsible. Now she's taking the law into her own hands. Never underestimate a mother's love.
13-MINUTE MURDER: He can kill anybody in just minutes--from the first approach to the clean escape. His skills have served him well, and he has a grand plan: to get out alive and spend his earnings with his beloved wife, Maria.
An anonymous client offers Ryan a rich payout to assassinate a target in Harvard Yard. It's exactly the last big job he needs to complete his plan. The precision strike starts perfectly, then somehow explodes into a horrifying spectacle. Ryan has to run and Maria goes missing. Now the world's fastest hit man sets out for one last score: Revenge. And every minute counts.

James Patterson is the world's bestselling author and most trusted storyteller. He has created many enduring fictional characters and series, including Alex Cross, the Women's Murder Club, Michael Bennett, Maximum Ride, Middle School, and I Funny. Among his notable literary collaborations are The President Is Missing, with President Bill Clinton, and the Max Einstein series, produced in partnership with the Albert Einstein Estate. Patterson's writing career is characterized by a single mission: to prove that there is no such thing as a person who "doesn't like to read," only people who haven't found the right book. He's given over three million books to schoolkids and the military, donated more than seventy million dollars to support education, and endowed over five thousand college scholarships for teachers. The National Book Foundation recently presented Patterson with the Literarian Award for Outstanding Service to the American Literary Community, and he is also the recipient of an Edgar Award and six Emmy Awards. He lives in Florida with his family.
or
Buy Here
Copyright © 2020 American Booksellers Association