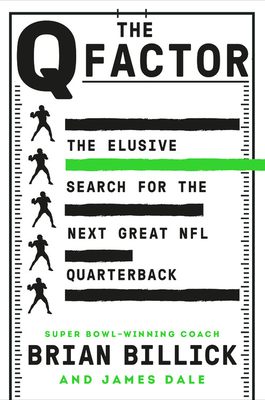 The Elusive Search for the Next Great NFL Quarterback

Brian Billick, Super Bowl-winning coach and current analyst for the NFL network, takes on the 2018 draft class of quarterbacks and follows them for two years, identifying the tangibles and intangibles of success, in search of the key to better predicting who will make it as a top-ranked NFL franchise QB.
There are elite athletes in every sport -- people who possess tangible and intangible qualities that allow them to overcome daunting odds, spot opportunity in the midst of adversity, and turn defeat into victory. No position embodies this dynamic more than football quarterbacks, and nothing is a greater test of performance than the NFL.
The tangibles -- metrics, stats, ratings, bowl games, championships -- are critical to evaluation. But they're not enough. Every year, highly rated college quarterbacks are analyzed, critiqued, hyped up and/or doubted, and those who manage to survive the scrutiny are drafted early. Some of those early picks make it to the top, some end up journeymen, and some just wash out. Why? What separates the elites from the pack?
In THE Q FACTOR, former NFL coach Brian Billick takes the highly promising 2018 NFL quarterback Draft class -- the most touted class since 2004 (Manning, Roethlisberger, Rivers) and 1983 (Elway, Kelly, Marino) -- and measures the top five quarterback picks to gauge how, why, and if they succeed. They are all first rounders, all with sterling college credentials, all talented athletes, all taken by teams betting their futures. One or maybe two could go on to greatness. But which ones, and why? Could the prediction process be better? Are the "experts" looking at the wrong factors? How do we find the best of the best?
That's what THE Q FACTOR explores...and finally explains.

Praise For The Q Factor: The Elusive Search for the Next Great NFL Quarterback…

"A great quarterback is the most valuable asset in American team sports. Brian Billick's THE Q FACTOR is a fascinating and necessary search for an answer to the question that defines the NFL: How can a team identify a championship quarterback in the making? A must-read for anyone who cares about our modern-day national pastime."—Ian O'Connor, New York Times bestselling author of BELICHICK

"Brian Billick was offensive co-ordinator of the Minnesota Vikings team that set an NFL record for points scored, and he went on to win a Super Bowl with the Baltimore Ravens. He has the smarts, instincts and scars to evaluate the quarterback position. In THE Q FACTOR, he gives us real insight on the search for the best recent quarterbacks and the profound decisions that impacted the entire league. THE Q FACTOR is a must-read."—James "Shack" Harris, former NFL quarterback and front office executive

"How do you find a great NFL quarterback? Which stats matter and which don't? How do you measure things like decision-making and leadership? Brian Billick has taken on one of the great challenges in sports, deconstructed the whole process and rebuilt it from the bottom up. This could change the search for leaders on the field...and maybe even off the field."—Gary Kubiak, former NFL quarterback, offensive coordinator, and Super Bowl-winning head coach

"As a QB who fell through the cracks and wasn't given a chance by many 'experts', I was fascinated by Brian Billick's THE Q FACTOR. I've been asked a thousand times, 'Why did so many people miss on you?' and 'Is it possible to accurately evaluate the QB position?' Billick tackles these questions and gives us answers. THE Q FACTOR is a deep dive into the most important position in sports and a must-have tool to help find 'the next great QB'."—Kurt Warner, Hall of Fame quarterback and NFL commentator

Brian Billick started his career working with the legendary Bill Walsh, became the offensive coordinator for the record-setting Minnesota Vikings offense, then went on to become the head coach of the Baltimore Ravens and the best single defense in the history of the NFL. Under Billick, the Ravens won their first Super Bowl, an overwhelming 34-7 win vs. the New York Giants in Super Bowl XXXV. In 2008, he joined Fox as a commentator and the NFL Network as a contributor. He lives in Maryland with his wife and family.

James Dale has collaborated as co-author on books ranging from sports to negotiation to medicine to politics, including We're Better Than This with Congressman Elijah Cummings, Together We Were Eleven Foot Nine with Hall of Fame pitcher Jim Palmer, The Power of Nice with agent/negotiator Ron Shapiro, Alpha Docs with cardiologist Dan Munoz, and the New York Times bestseller Just Show Up with Cal Ripken Jr.
Loading...
or support indie stores by buying on