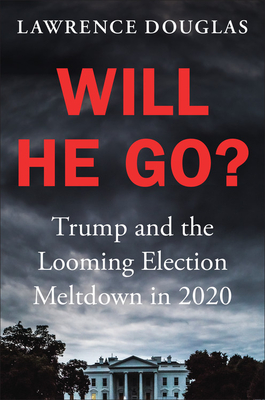 Trump and the Looming Election Meltdown in 2020

In advance of the 2020 election, legal scholar Lawrence Douglas prepares readers for a less-than-peaceful transition of power.

It doesn't require a strong imagination to get a sense of the mayhem Trump will unleash if he loses a closely contested election. It is no less disturbing to imagine Trump still insisting that he is the rightful leader of the nation. With millions of diehard supporters firmly believing that their revered president has been toppled by malignant forces of the Deep State, Trump could remain a force of constitutional chaos for years to come. WILL TRUMP GO? addresses such questions as:
How might Trump engineer his refusal to acknowledge electoral defeat? What legal and extra-legal paths could he pursue in mobilizing a challenge to the electoral outcome?

What legal, political, institutional, and popular mechanisms can be used to stop him?

What would be the fallout of a failure to remove him from office? What would be the fallout of a successful effort to unseat him?
Can our democracy snap back from Trump?
Trump himself has essentially told the nation he will never accept electoral defeat. A book that prepares us for Trump's refusal to concede, then, is hardly speculative; it is a necessary precaution against a coming crisis.

Praise For Will He Go?: Trump and the Looming Election Meltdown in 2020…

"It's not clear that American democracy can survive if Donald Trump is re-elected, and it's not clear it can survive if he isn't. WILL HE GO? is the most compelling sort of political thriller -- one whose outcome will affect us all."—p.p1 {margin: 0.0px 0.0px 0.0px 0.0px; line-height: 17.0px; font: 14.7px Helvetica; color: #262524; -webkit-text-stroke: #262524}span.s1 {font-kerning: none}Elizabeth Kolbert, Pulitzer Prize-winning and New York Times bestselling author of The Sixth Extinction

"Part page-turning thriller, part elegant mystery novel, part savvy political roadmap, part sophisticated legal and historical primer, this marvelous book is the first to take seriously a question many are too scared to ask themselves: What happens when the president, who believes he won the 2016 election in a popular landslide and without any help from his Russian friends, is convinced the 2020 election was stolen from him by a deep state conspiracy? In what ways might everything we know about Donald Trump and his devoted followers lead to an unprecedented constitutional crisis in 2021? Clearly written and carefully researched, this exploration of the several catastrophes we might face is a must-read for anyone who cares about preserving America."—p.p1 {margin: 0.0px 0.0px 0.0px 0.0px; font: 12.0px Helvetica}Laurence H. Tribe, author of To End A Presidency: The Power of Impeachment

"This is a break-the-glass alarm not just for one election, but for our constitutional democracy."—p.p1 {margin: 0.0px 0.0px 0.0px 0.0px; text-align: center; font: 12.0px Helvetica}Richard Wolffe, New York Times bestselling author of Renegade

"As Douglas expertly shows, the principal constraint on ousted presidents behaving badly has historically been the collapse of support from within their own political party. But a far better solution would be to put our resources into making election results harder to dispute. It's unquestionably the right conclusion; one hopes only that it won't be too late."—p.p1 {margin: 0.0px 0.0px 0.0px 0.0px; text-align: center; font: 12.0px Helvetica}Professor Stephen I. Vladeck, University of Texas School of Law

"With characteristic acuity, Lawrence Douglas asks the question so many would rather avoid: what if President Trump loses the election but refuses to leave office? His answer may astound you. But the best defense is a good offense. Read and prepare!"—p.p1 {margin: 0.0px 0.0px 0.0px 0.0px; text-align: center; font: 12.0px Helvetica}David D. Cole, national legal director, ACLU

Lawrence Douglas is the James J. Grosfeld Professor of Law, Jurisprudence and Social Thought at Amherst College. He is the prize-winning author of seven books, most recently The Right Wrong Man: John Demjanjuk and the Last Great Nazi War Crimes Trial.
Loading...
or support indie stores by buying on