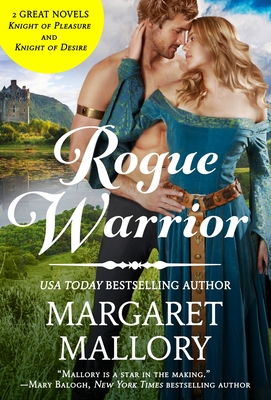 Get swept off your feet with not one but two steamy medieval romances that will pull you back in time and directly into the arms of a handsome and mysterious duke.

Knight of Desire
His surcoat still bloody from battle, William FitzAlan comes to claim the strategic borderlands granted to him by the king. One last prize awaits him at the castle gates: the lovely Lady Catherine Rayburn.
Catherine risked everything to spy for the crown. Her reward? Her lands are declared forfeit and she is given this choice: marry FitzAlan or be taken to the Tower. Catherine agrees to give her handsome new husband her body, but she's keeping secrets, and dare not give him her heart.
As passion ignites and danger closes in, Catherine and William must learn to trust in each other to save their marriage, their land, and their very lives.
Knight of Pleasure
Lady Isobel Hume is an expert swordswoman who knows how to choose her battles. When the king asks her to wed a French nobleman to form a political alliance, she agrees. But that's before the devilishly charming Sir Stephen Carleton captures her heart-and tempts her to betray her betrothed, her king, and her country.
Sir Stephen Carleton enjoys his many female admirers—until he dedicates himself to winning the lovely Isobel. So when a threat against the king leads Isobel into mortal danger, Stephen has a chance to prove that he is more than a knight of pleasure. . . and that love can conquer all.

Praise For Rogue Warrior: 2-in-1 Edition with Knight of Desire and Knight of Pleasure (All the King's Men)…

"The story sizzles with romance and adventure."
—RomRevToday.com on Knight of Desire

"Mallory imbues history with a life of its own... Her characters are vibrantly alive and full of emotional depth, each with their own realistic flaws."—RT Book Reviews