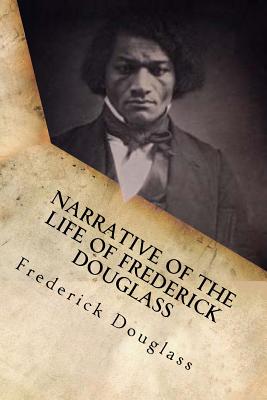 Narrative of the life of Frederick Douglass

Douglass' Narrative begins with the few facts he knows about his birth and parentage; his father is a slave owner and his mother is a slave named Harriet Bailey. Here and throughout the autobiography, Douglass highlights the common practice of white slave owners raping slave women, both to satisfy their sexual hungers and to expand their slave populations. In the first chapter, Douglass also makes mention of the hypocrisy of Christian slave owners who used religious teachings to justify their abhorrent treatment of slaves; the religious practice of slave owners is a recurrent theme in the text. Throughout the next several chapters, Douglass describes the conditions in which he and other slaves live. As a slave of Captain Anthony and Colonel Lloyd, Douglass survives on meager rations and is often cold. He witnesses brutal beatings and the murder of a slave, which goes unnoticed by the law or the community at large. Douglass argues against the notion that slaves who sing are content; instead, he likens singing to crying - a way to relieve sorrow. Douglass also draws attention to the false system of values created by slavery, in which allegiance to the slave master is far stronger than an allegiance to other slaves. When he is seven or eight years old, Douglass is sent to Baltimore to live with the Auld family and care for their son, Thomas. Mrs. Auld gives Douglass reading lessons until her husband intervenes; Douglass continues his lessons by trading bread for lessons with poor neighborhood white boys and by using Thomas' books. Soon, Douglass discovers abolitionist movements in the North, including those by Irish Catholics. Several years later, as a result of his original owner's death, Douglass finds himself being lent to a poor farmer with a reputation for "breaking" slaves. Douglass spends a year with Covey, who cruelly and brutally whips the slave until Douglass finally fights him. From that day on, Covey leaves Douglass alone. Douglass lives for a time with William Freeland, a kind master, and Douglass finds a family among the other slaves there. Douglass becomes a Sunday school teacher to other slaves, a position he enjoys. Although this situation is better than any he has experienced, it is still a far cry from freedom, so Douglass attempts to escape by canoeing up the Chesapeake Bay. He is caught and eventually finds himself working again for Hugh Auld in Baltimore. First, he runs errands for shipyard workers, but he after some of the workers heckle and strike Douglass, he fights back and is nearly beaten to death. Working at a different shipyard after the fight, Douglass becomes proficient at ship caulking, but he is forced to turn his wages over to Auld. Douglass soon makes an arrangement with Auld to hire himself out and give Auld a set amount of wages each week. Douglass is allowed to pocket the rest, thus saving enough for his escape to New York. After his escape, Douglass is advised to move to New Bedford, Massachusetts, and he settles there with his new wife, Anna Murray. Douglass makes a living doing odd jobs; he is unable to find work as a caulker, however, because the white caulkers refuse to work with blacks, fearing the former slaves will take over their jobs. Although he still fears being caught and returned to the South, Douglass attends an anti-slavery convention, where he is encouraged to speak. This forms the beginning of his life in the public eye, speaking and writing in favor of the abolition of slavery.