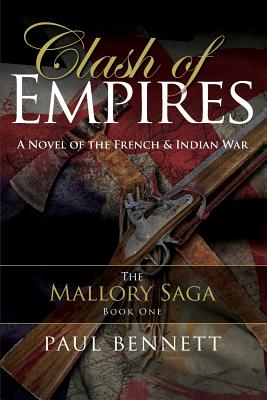 A Novel of the French Indian War

In 1750, the Mallory family moved to the western Pennsylvania frontier, seeking a home and a future. Clash of Empires reveals the harrowing experiences of a colonial family drawn into the seven-year conflict between the British and French for control of the continent - the French and Indian War.

Paul's education was of the public variety and when he reached Junior High he discovered that his future did not include the fields of mathematics or science. This was generally the case throughout his years in school as he focused more on his interest in history; not just the rote version of names and dates but the causes. Paul studied Classical Civilization at Wayne State University with a smattering of Physical Anthropology thrown in for good measure. Logically, of course, Paul spent the next four decades drawing upon that vast store of knowledge working in large, multi-platform data centers, and is considered in the industry as a bona fide IBM Mainframe dinosaur heading for extinction. Paul currently resides in the quaint New England town of Salem, Massachusetts with his wife, Daryl. The three children have all grown, in the process turning Paul's beard gray, and have now provided four grandchildren; the author is now going bald. You can find Paul: His Facebook page: https: //www.facebook.com/Clash-of-Empires-1115407281808508/ On Twitter: @hooverbkreview Email: mallorysaga@gmail.com
Loading...
or support indie stores by buying on