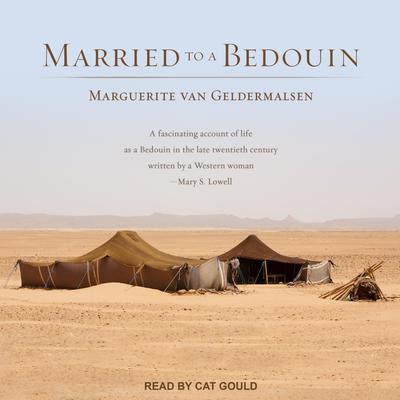 Married to a Bedouin (Digital Audiobook)

"Where you staying?" the Bedouin asked. "Why you not stay with me tonight—in my cave?"

Thus, begins Marguerite van Geldermalsen's story of how a New Zealand-born nurse came to be married to Mohammad Abdallah Othman, a Bedouin souvenir-seller from the ancient city of Petra in Jordan. It was 1978 and she and a friend were travelling through the Middle East when Marguerite met the charismatic Mohammad who convinced her that he was the man for her.

A life with Mohammad meant moving into his ancient cave and learning to love the regular tasks of baking shrak bread on an open fire and collecting water from the spring. And as Marguerite feels herself becoming part of the Bedouin community, she is thankful for the twist in fate that has led her to this contented life.

Marguerite's light-hearted and guileless observations of the people she comes to love are as heart-warming as they are valuable, charting Bedouin traditions now lost to the modern world.

Cat Gould grew up in Sydney, Australia, and after extensive travel moved to the United States in 1990. She is a classically trained actress with a BFA from Southern Oregon University and has performed in many regional productions. Her passion for storytelling, communication, and language is matched well with her dexterity with characters and dialect. She can communicate in French, Spanish, and Italian, and is a voracious reader of fiction, philosophy, and psychology to deepen her understanding and ability to express the human condition.