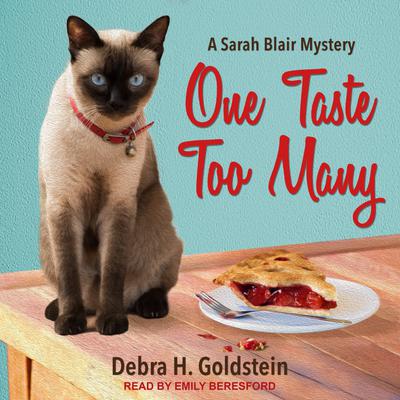 One Taste Too Many (Sarah Blair Mystery) (Digital Audiobook)

For culinary challenged Sarah Blair, there's only one thing scarier than cooking from scratch—murder!

Married at eighteen, divorced at twenty-eight, Sarah Blair reluctantly swaps her luxury lifestyle for a cramped studio apartment and a law firm receptionist job in the tired hometown she never left. With nothing much to show for the last decade but her feisty Siamese cat, RahRah, and some clumsy domestic skills, she's the polar opposite of her bubbly twin, Emily—an ambitious chef determined to take her culinary ambitions to the top at a local gourmet restaurant . . .

Sarah knew starting over would be messy. But things fall apart completely when her ex drops dead, seemingly poisoned by Emily's award-winning rhubarb crisp. Now, with RahRah wanted by the woman who broke up her marriage and Emily wanted by the police for murder, Sarah needs to figure out the right recipe to crack the case before time runs out. Unfortunately, for a gal whose idea of good china is floral paper plates, catching the real killer and living to tell about it could mean facing a fate worse than death—being in the kitchen!

Emily Beresford is a professional audiobook narrator who is a nerd for books, no matter the genre. She absolutely loves all forms of literature, and that transfers to the listeners through her passionate performances. She primarily works out of her professional home studio with top notch recording equipment and software, but will occasionally travel to other studios for human interaction. Emily earned her BA in liberal studies from Green Mountain College in Vermont, with concentrations in creative writing, music, and English. In 2013 she was nominated for an Audie Award by the Audiobook Publishers Association and received an Earphones Award from AudioFile magazine. She works for several major publishers and voices books for many bestselling authors. She lives in the Midwest with her beautiful, fun family.