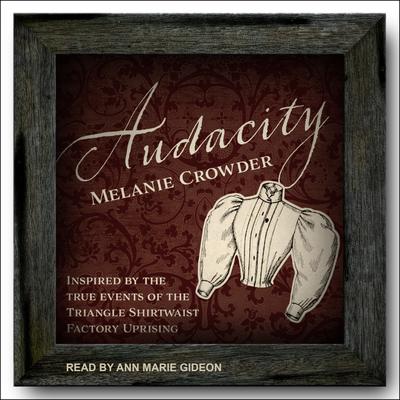 A gorgeously told novel in verse written with intimacy and power, Audacity is inspired by the real-life story of Clara Lemlich, a spirited young woman who emigrated from Russia to New York at the turn of the twentieth century and fought tenaciously for equal rights. Bucking the norms of both her traditional Jewish family and societal conventions, Clara refuses to accept substandard working conditions in the factories on Manhattan's Lower East Side. For years, Clara devotes herself to the labor fight, speaking up for those who suffer in silence. In time, Clara convinces the women in the factories to strike, organize, and unionize, culminating in the famous Uprising of the 20,000.

Powerful, breathtaking, and inspiring, Audacity is the story of a remarkable young woman, whose passion and selfless devotion to her cause changed the world.

Ann Marie Gideon is an Atlanta-based actor and voice artist. She graduated with a BFA from the University of Memphis, trained at the Accademia dell'Arte in Arezzo, Italy, and has performed in theaters across the United States. Ann Marie has been narrating audiobooks continuously since 2013 and has developed a love and passion for crafting a story through narration. With over eighty-five titles under her belt, she specializes in young adult, self-help nonfiction, contemporary female fiction, and romance.