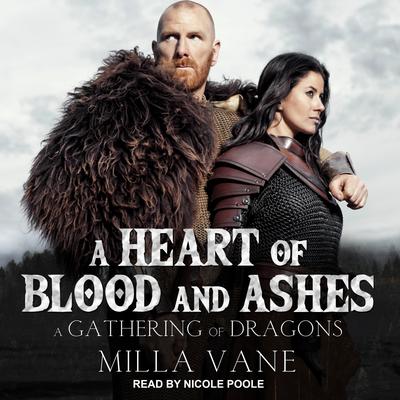 A Heart of Blood and Ashes (Gathering of Dragons) (Digital Audiobook)

A generation past, the western realms were embroiled in endless war. Then the Destroyer came. From the blood and ashes he left behind, a tenuous alliance rose between the barbarian riders of Parsathe and the walled kingdoms of the south. That alliance is all that stands against the return of an ancient evil—until the barbarian king and queen are slain in an act of bloody betrayal.

Though forbidden by the alliance council to kill the corrupt king responsible for his parents' murders, Maddek vows to avenge them, even if it costs him the Parsathean crown. But when he learns it was the king's daughter who lured his parents to their deaths, the barbarian warrior is determined to make her pay.

Yet the woman Maddek captures is not what he expected. Though the last in a line of legendary warrior-queens, Yvenne is small and weak, and the sharpest weapons she wields are her mind and her tongue. Even more surprising is the marriage she proposes to unite them in their goals and to claim their thrones—because her desire for vengeance against her father burns even hotter than his own . . .

Nicole Poole is a classically trained actor with equal passions for literature and improvisation. She has toured with the Royal Shakespeare Company, has been a member of the critically acclaimed Walter Thompson Orchestra for over fifteen years, and recently became a member of the Parisian groups SPOUMJ and Anitya. She is honored to have been recognized for her narration by an AudioFile Earphones Award, a Publisher's Weekly Listen-Up Award, and nomination for an Audie Award.