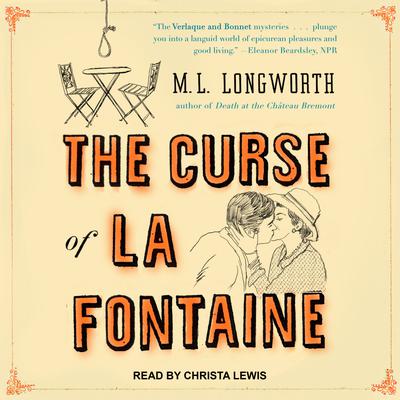 Chef Sigisbert "Bear" Valets has just opened his own restaurant, La Fontaine, in Aix-en-Provence. It's an immediate success—glowing reviews and a loyal clientele, including our favorite investigative duo, Verlaque and Bonnet. But when he decides to extend his restaurant's seating into a historic courtyard, some very powerful neighbors are against him. The local historical society wants the courtyard, which witnessed a seventeenth-century hanging and two World War II-era murders, to remain untouched.

Valets charges on, even after a skeleton is found buried next to the courtyard's ancient fountain. But when Valets begins receiving threatening letters, he becomes convinced that his life is in danger. And then the fountain inexplicably stops running. By disturbing the garden, has Bear triggered an age-old curse? And can newlyweds Verlaque and Bonnet solve the mystery before someone else ends up dead? Set against the blossoming backdrop of the south of France, M. L. Longworth's latest is sure to thrill fans of Donna Leon and Andrea Camilleri.

The narrator of over 100 audiobooks, Christa Lewis has been nominated for an Audie Award and was a 2018 Listener's Choice finalist. She has been featured in AudioFile magazine and earned multiple Earphones Awards for recordings that have become Audible bestsellers in YA and literary fiction. Christa is a classically trained actress and graduate of Boston University's actor training program. She got her start as the voice of international television station DW-TV, and has been a regular on hundreds of cartoons, museum guides, documentaries, and commercials. Christa is bilingual-she speaks accent-free German fluently and can offer a variety of accents and dialects. An experienced teacher and director, Christa teaches commercial voice-over and audiobook narration.