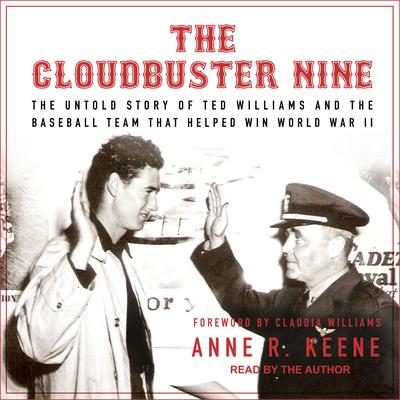 In 1943, the New York Yankees won the World Series but one of the nation's strongest baseball teams practiced on a skinned-out college field in the heart of North Carolina. Boston Red Sox teammates Ted Williams and Johnny Pesky, and Boston Braves pitcher Johnny Sain were among a cadre of fighter-pilot cadets who wore the Cloudbuster Nine baseball jersey at an elite Navy training school at the University of North Carolina at Chapel Hill.

As a child, Anne Keene's father, Jim Raugh, suited up as the team bat boy and mascot. He got to know his baseball heroes personally, watching players hit the road on cramped, tin-can buses, dazzling factory workers, kids, and service members at dozens of games, including a war-bond exhibition against a major league team managed by Babe Ruth at Yankee Stadium.

Jimmy followed his baseball dreams as a college All-American but was crushed later in life by a failed major-league bid with the Detroit Tigers. He would have carried this story to his grave had Anne not discovered his scrapbook from a Navy Pre-Flight school that shaped some of America's greatest heroes, including Presidents George H. W. Bush and Gerald Ford, astronaut and Senator John Glenn, and Paul "Bear" Bryant.

With the help of rare images and insights from World War II baseball veterans such as Yankees legends Dr. Bobby Brown and Eddie Robinson (the oldest living player to play on a World Series–winning team), the story of this remarkable team is brought to life for the first time in The Cloudbuster Nine: The Untold Story of Ted Williams and the Baseball Team That Helped Win World War II.

Anne R. Keene focuses on narrative nonfiction. A graduate of the University of North Carolina at Chapel Hill School of Journalism, she began her professional career working as a speechwriter on Capitol Hill. Her work has appeared in the New York Times, the Dallas Morning News, the Raleigh News & Observer, National Geographic Books and a variety of sports publications including Boston Sports Extra and SwimSwam magazine. Passionate about historic preservation and athletics, Anne is a member of the Society for American Baseball Research and speaks around the country at ballparks, museums and literary groups about WWII baseball.