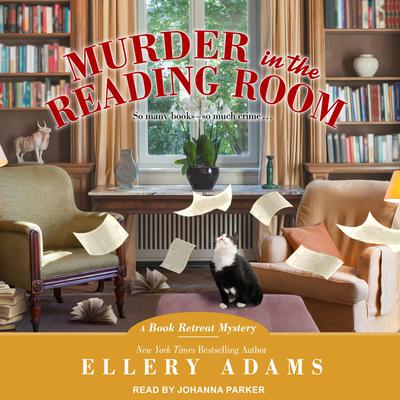 Storyton Hall, Virginia, is a paradise for book lovers who come from all over for literary getaways. But manager Jane Steward is temporarily leaving for another renowned resort—in hopes of solving a twist-filled mystery . . .

Jane's boyfriend, Edwin, is missing, and she thinks she may find him at North Carolina's historic Biltmore Estate. Officially, she's there to learn about luxury hotel management, but she's also prowling around the breathtaking buildings and grounds looking for secret passageways and clues. One of the staff gardeners promises to be helpful . . . that is, until his body turns up in the reading room of his cottage, a book on his lap.

When she finally locates the kidnapped Edwin, his captor insists that she lead him back to Storyton Hall, convinced that it houses Ernest Hemingway's lost suitcase, stolen from a Paris train station in 1922. But before they can turn up the treasure, the bell may toll for another victim . . .

Johanna Parker, an AudioFile Earphones Award winner, has earned an esteemed Audie Award and three Audie nominations. She has received high praise for her work in all genres, including her portrayal of Sookie Stackhouse in Charlaine Harris's Southern Vampire Mysteries series (the source material for HBO's True Blood), of which AudioFile has said, "Parker personifies Harris's perky Southern heroine, Sookie Stackhouse. Her splendid pacing allows listeners time to absorb the action and emotion. Listeners will be enthralled."