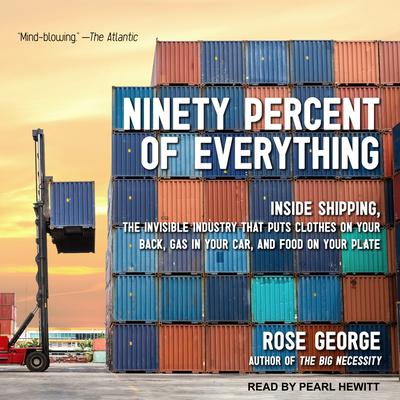 Ninety Percent of Everything (Digital Audiobook)

On ship-tracking websites, the waters are black with dots. Each dot is a ship; each ship is laden with boxes; each box is laden with goods. In postindustrial economies, we no longer produce but buy. We buy, so we must ship. Without all those dots, the world would not work.

Freight shipping has been no less revolutionary than the printing press or the Internet, yet it is all but invisible. Away from public scrutiny, shipping revels in suspect practices, dubious operators, and a shady system. Infesting our waters, poisoning our air, and a prime culprit of acoustic pollution, shipping is environmentally indefensible. And then there are the pirates.

Rose George, acclaimed chronicler of what we would rather ignore, sails from Rotterdam to Suez to Singapore on ships the length of football fields and the height of Niagara Falls; she patrols the Indian Ocean with an anti-piracy task force; she joins seafaring chaplains, and investigates the harm that ships inflict on endangered whales.

Sharply informative and entertaining, Ninety Percent of Everything reveals the workings and perils of an unseen world that holds the key to our economy, our environment, and our very civilization.

Originally from Newcastle-Upon-Tyne in Northeast England, audiobook narrator Pearl Hewitt currently lives with her husband and two children in Houston, Texas. Over the years she has worked as a customer service rep, a teaching assistant, and a teacher, but deep down there was always a performer wanting to get out. In 2007 her twelve-year-old son told her that he believed she was so good at reading stories out loud that she should do that as a job. That was her defining, eureka! moment, and she's never looked back. Pearl discovered the world of voice-overs and pursued a career in voice acting. She attended workshops, training seminars, and conferences, and began volunteering as the resident mystery and suspense narrator for Houston Sight-Into-Sound Radio, where her work earned numerous IAAIS awards for narration and production. In 2012 Pearl decided to focus on audiobooks, and her professional career blossomed while working directly with authors and narrating for a number of major publishers. Pearl's voice is perfectly suited to British Regency romance and cozy murder mysteries, but her personal favorites are the classics, especially children's literature.