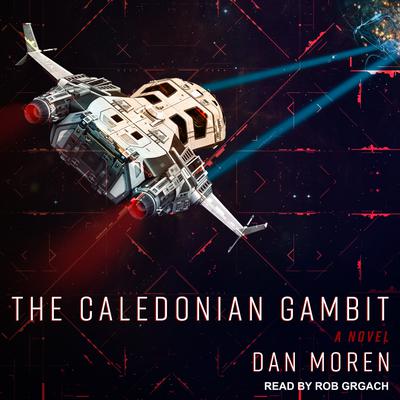 The galaxy is mired in a cold war between two superpowers, the Illyrican Empire and the Commonwealth. Thrust between this struggle are Simon Kovalic, the Commonwealth's preeminent spy, and Kyle Rankin, a lowly soldier happily scrubbing toilets on Sabaea, a remote and isolated planet. However, nothing is as it seems.

Kyle Rankin is a lie. His real name is Eli Brody, and he fled his home world of Caledonia years ago. Simon Kovalic knows Caledonia is a lit fuse hurtling towards detonation. The past Brody so desperately tried to abandon can grant him access to people and places that are off limits even to a professional spy like Kovalic.

Kovalic needs Eli Brody to come home and face his past. With Brody suddenly cast in a play he never auditioned for, he and Kovalic will quickly realize it's everything they don't know that will tip the scales of galactic peace. Sounds like a desperate plan, sure, but what gambit isn't?

The Caledonian Gambit is a throwback to the classic sci-fi adventures of spies and off-world politics, but filled to the brim with modern sensibilities.

Rob Grgach is an ambitious jack-of-all-trades, with professional acting credits spanning theater and film; as well as behind the scenes theatrical work across Connecticut, Massachusetts, and New York.